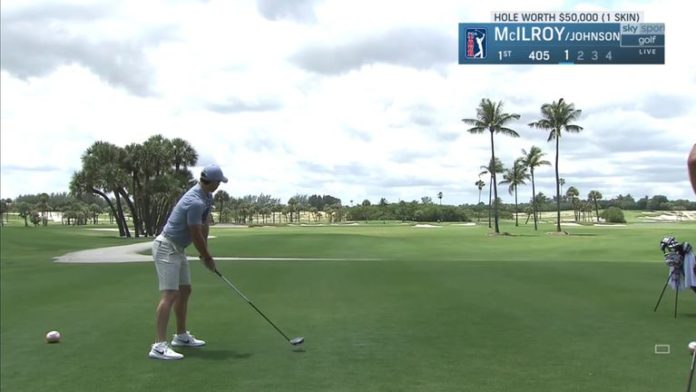 Golf is back on Sky Sports! And it was Rory McIlroy who had the honour of hitting the first shot seen live on our TV screens since coronavirus changed the world.

McIlroy was first on the tee in the TaylorMade Driving Relief charity skins match, which aims to raise around $4m for various healthcare charities in the United States.

The world No 1 partnered Dustin Johnson against Rickie Fowler and Matthew Wolff in the made-for-television exhibition match under sunny skies at the historic Seminole Golf Club in Florida.

It was the first time we had seen any live professional golf on our screens since The Players Championship was abandoned after just one round in March, after which a near-global shutdown of golf was implemented.

The match at Seminole featured every strict social distancing protocol, with the players all carrying their own bags while activity elsewhere was minimal, with just a handful of cameramen and other officials permitted on the course.

McIlroy only returned to practice two weeks ago, but he showed little sign of rust on the opening tee as a confident swipe with the driver sent his ball on a perfect line and a distance of 320 yards.

It was a fairly average drive for Rory, but a massive drive in the grand scheme of things!