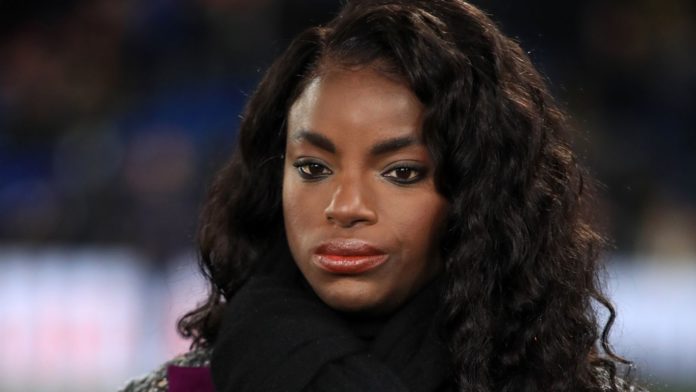 Eni Aluko says she has received online racist abuse and her family have been targeted after giving her opinion on the government’s furlough scheme.

The former England and Chelsea forward, who is sporting director at Aston Villa Women, apologised earlier this week for any unintended offence her furlough tweets may have caused, adding: “I have no interest in being a source of further public upset.”

In a series of posts on social media, Aluko says she has received a stream of abuse and her family have been singled out.

“Tweeps, so we are going have to talk about that F-word again,” Aluko wrote on Twitter.

THREAD-Tweeps, so we are going have to talk about that F-word again. Despite my public apology about causing offence and misunderstanding, the last 3 days I have received abuse, racism, abuse to my family and people finding phone numbers of my family to send further messages.

“Despite my public apology about causing offence and misunderstanding, the last 3 days I have received abuse, racism, abuse to my family and people finding phone numbers of my family to send further messages.

“Now, I will say this one last time. My tweet was referring to other “tweets” by SOME people taking advantage of the furlough system and bragging about it on twitter. At NO point did I mention Brits or all people on furlough or the entire nation. Let’s get that very clear.

“None of my tweets were racist, sexist, homophobic, contained profanities or were abusive. At worst it was misworded in a hurry out of annoyance. Which I have apologised for and deleted. But I’ll be damned if as a result I accept my family receiving further abuse.

“If you remain offended, it is your choice. I can’t help you. I am not looking for sympathy. I encourage you NOW to unfollow/block/mute my account if you do not like what you see. No problem in the slightest.

“I accept as a high profile person the position comes with critics and dislike. No problem. Success comes with opposition However I’ll reiterate that some high profile people have recently taken their own lives as a result of online abuse and trolls. It starts here on Twitter.

“I have had fathers with daughters in profile pics go out of their way to message me the most horrendous things. If your daughters received such disgusting words online would you be happy???? Think about it.

“Again, feel free to go back to my tweets from 17-20 March endorsing/applauding the economic safety net furlough brings for hard working people in UK during this pandemic. I have family and friends in the same boat. I am with you, and we are all in this together.

“This is already a difficult time. We, including me, need to be conscious of spreading encouragement, love, support not negativity and hate. Easy to write #BeKind but let’s all try and live it in our actions.

“Wishing you all positivity, support, encouragement and strength whilst we navigate these unprecedented times.”