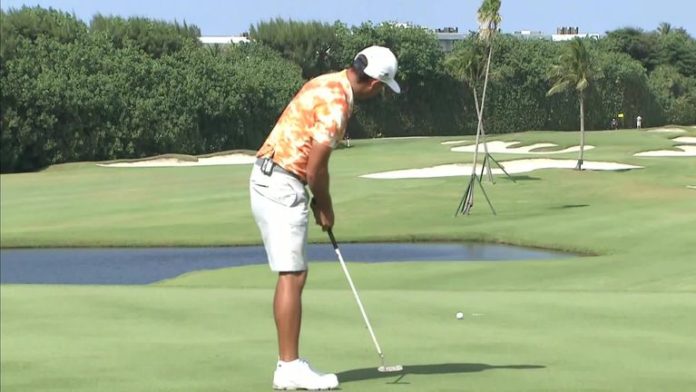 Contested over what turned out to be 19 holes at a blustery Seminole Golf Club, McIlroy landed the final $1.1m in skins with one smooth swish of a wedge in a nearest-the-pin challenge which secured victory over Oklahoma State University graduates Rickie Fowler and Matthew Wolff.

It was a charity match in which the production and protocols were just as important and noteworthy as the quality of the golf, which was understandably inconsistent from each of the quartet.

With no spectators in sight for the first professional golf to be broadcast live on TV since the abandoned first round of The Players Championship, 66 days ago, we saw each of the players carrying their own bags, using range finders to determine yardages, picking their own clubs and being unable to blame caddies for poor club selection!

Only match referee Mark Russell was permitted to touch the flagsticks, but the greater purpose of the match was achieved as over $4m was raised for various healthcare charities in the United States.

McIlroy had the honour of striking the first shot seen by a pro since the lockdown – a 320-yard drive straight down the middle of the fairway which would have been regarded as routine for the world No 1 three months ago.

For the record, McIlroy and Johnson were in control early when, after two tied holes, Johnson got up and down for birdie at the third which Fowler could not match, but Fowler got the youngsters on the board on the next hole, to the tune of $50,000.

Another good up-and-down from Johnson collected another skin at the fifth, and McIlroy was the only player to convert a birdie chance at the next before Fowler and Wolff both birdied the ninth for $300,000 which swept them into the lead.

And, after the final six holes were tied, the remaining $1.1m in skins was decided by a nearest-the-pin shootout back at the short 17th, where the tee had been moved up to create a 120-yard par three.

Wolff set a good target of around 15 feet before Fowler and Johnson both missed the green, but McIlroy stepped up and knocked a decent wedge to 12 feet which clung onto the green and netted them the overall win.