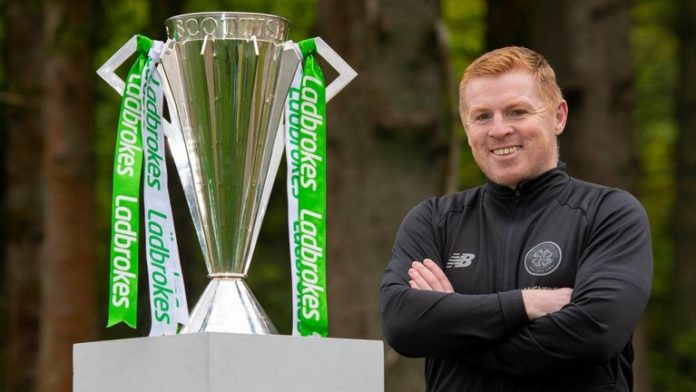 Celtic manager Neil Lennon says he’s not sure whether the newly crowned Scottish Premiership champions need to make any new signings ahead of their quest for a 10th consecutive title.

Monday’s decision to call the Premiership early amid the coronavirus pandemic and declare Celtic champions for a ninth successive season has allowed Lennon to begin planning for the next campaign.

“I am really happy with the squad, I am not sure we need to do a lot of rebuilding at all, if at all.

“But again you don’t know what the landscape is going to look like with bringing players in.”

Lennon is set to lose loan players Fraser Forster, Mohamed Elyounoussi and Moritz Bauer, while the likes of Jonny Hayes and Craig Gordon are soon out of contract.

The Celtic boss would no doubt be keen to keep Forster if a deal can be done with Southampton and he has other players in his squad who could offer more next term.

January signings Ismaila Soro and Patryk Klimala have yet to establish themselves and the likes of right-back Hatem Abd Elhamed and striker Vakoun Bayo were just coming back from injury when the season was suspended.

Much could depend on how much interest develops in top goalscorer Odsonne Edouard, with his potential departure likely to increase the budget for new arrivals.

Football at all levels in Scotland is suspended until June 10, with Celtic set to resume training on that date barring further push backs.

“June 10 is the mandate, we can start training back in groups, whether that changes between now and then we don’t know, but that’s what we are aiming for,” Lennon said.

“With the league finishing now we can hopefully get a start date for next season and look to build from that.”