Home Culture Oscars 2021 ‘could be postponed’ due to coronavirus 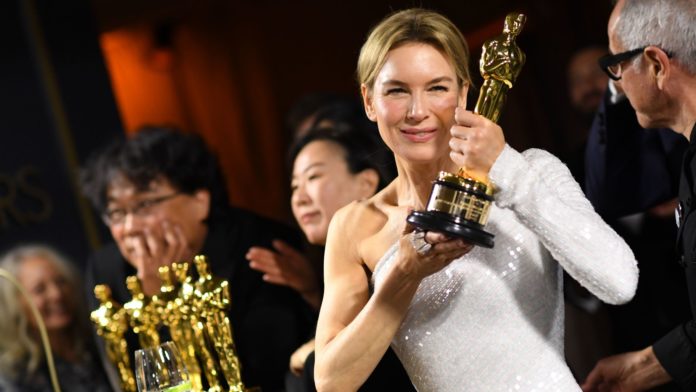 Next year’s Oscars could be postponed due to the coronavirus pandemic, according to a report.

The 93rd Academy Awards are currently scheduled to take place on 28 February 2021.

But an industry insider, speaking to Variety about the possibility of the ceremony going ahead, has said: “It’s likely they’ll be postponed.”

Some events have made the decision to go virtual rather than cancel or postpone in light of the COVID-19 crisis.

However, as the world’s most recognised awards ceremony, it’s likely Oscars organisers are keen not to dilute the glitz and glamour associated with the live show.

Walking the red carpet ahead of the event would be impossible for stars, who would instead call in to collect their virtual gongs online.

The Academy of Motion Picture Arts and Sciences has yet to formally announce plans for the event, which airs on the ABC TV channel in America, but has detailed an alteration to the nominations process.

In April, the Academy introduced a temporary rule change for Oscar eligibility due to the impact of coronavirus.

Usually a film must have a seven-day theatrical release in Los Angeles County to qualify.

However, this year relaxed guidelines mean that films released digitally can still qualify if the studio had originally planned a theatrical release.

Theatrical runs scheduled to take place in New York, Chicago, Miami, Atlanta and the Bay Area will also be eligible.

At the time of the rule tweak, Academy president David Rubin told Variety: “It makes sense when we don’t really know what’s to come in terms of the availability of theatrical exhibition.

“We need to make allowances for this year only and during this time when theatres are not open so great film work can be seen and celebrated.”

However, this year’s amended Academy rules note: “Due to the global pandemic caused by coronavirus/COVID-19, all dates for the 93rd Academy Awards are subject to change.”

Many movies have had their release dates pushed back due to the closure of cinemas around the world, including the upcoming James Bond film No Time To Die and a host of Disney projects.

The Oscars ceremony itself has been postponed three times in its 93-year history.

First in 1938 due to flooding in Los Angeles, delaying the awards by a week.

Second in 1968 out of respect to Dr Martin Luther King Jr, who was murdered just a few days before the event was due to take place. It was postponed by two days.

And most recently in 1981, when the show was postponed by only 24 hours because of an assassination attempt on the then-president Ronald Reagan.

The Beast & his boss taking Wycombe to new heights

Waratahs deny Force from 14 points down

Jada Pinkett Smith reveals affair with singer during marriage to Will...