Home Sport England Rugby: How might the season end? 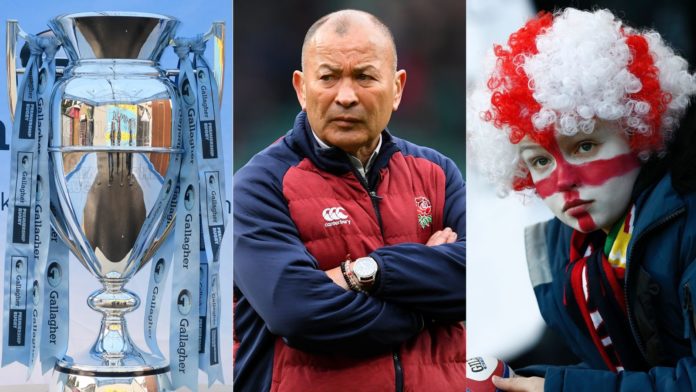 With games from the Premiership, Six Nations, summer tours, European Cup and autumn fixtures to be fulfilled, what might happen next?

We take a look at the questions and potential solutions being suggested regarding the end of the rugby season in England and abroad, and the growing list of issues and challenges it presents…

National set-ups and domestic clubs and their competitions are very much aligned in some rugby-playing nations, such as New Zealand and Ireland. However, in England and France, the national team and domestic leagues are very much their own entities.

So much so that the topic of restarting the season – whenever that may be – is being primed for a potential bone of serious contention.

Indeed, Premiership chief executive Darren Childs and LNR president Paul Goze have written to World Rugby expressing concerns and to request, in no uncertain terms, that they are included in any conversations relating to the sport’s calendar and restart.

“Essential” was how Childs and Gove described the need for domestic leagues to be involved, in addition to Test unions.

“The exceptional situation must lead all the parties to show a spirit of cooperation and solidarity. We do not however imagine that club competitions should be the variable for adjusting the calendar management in the context of this crisis,” the letter from Childs and Goze read.

Test rugby remains the main money driver and point of interest for watching fans around the globe, but the Premiership have taken a firm stance, in the expectation they may be asked to sacrifice in some form.

The RFU responded via a statement, saying: “We have proactively consulted with the PRL (Premiership Rugby Limited).

“We will continue to seek PRL updates and involvement regarding the completion options of the Premiership season as well as the calendar for future seasons.

“The discussions will always be centred around player welfare.”

Regardless, there are sure to be some frosty discussions when the picture becomes clearer as to when the sport could resume.

It’s very much a case of watch this space though.

Back in March, Premiership Rugby’s Childs caused consternation when he declared: “We are all working to try and hopefully be the first sport back on television.”

That, of course, will certainly not be the case now. As World Rugby’s chief medical officer Dr Eanna Falvey said recently: “Rugby is a contact sport. To fully train and to play matches requires intermittent close physical contact.

“Therefore, should a teammate or opposition player in a recent match develop an infection, all their teammates are likely to be close contacts and require isolation and testing.” As such, rugby is likely to be one of the last sports to return.

The Top 14 season in France has been cancelled, with the country’s government decreeing that sporting events may only restart in September. The PRO14 is yet to formally announce a cancellation, but such a move is looking increasingly likely, while all domestic rugby in England below the Premiership has been declared null and void.

As far as the Gallagher Premiership is concerned, the league remains committed to completing the campaign. In April, Childs said: “Following a series of constructive meetings with our clubs, investors, players’ representatives, commercial and broadcast partners, and the RFU, we have agreed on our approach to restart rugby, as soon as it is safe to do so.”

The final had been due to take place in June originally, with plans then said to have changed towards the season concluding in July and August. Any later would then begin to encroach on the beginning of the 2020/21 campaign.

The government in Britain has loosely announced that sporting events may begin to resume on June 1 at the earliest, but with rugby a rigorous contact sport, players will need a pre-season period in order to be in a position of fitness and strength to compete safely.

Clubs have yet to even begin training, and are awaiting guidance from the Department for Digital, Culture, Media and Sport (DCMS), with small groups the expected first step.

In terms of completing the season, were the time-frame to be squeezed to such an extent that it would appear unworkable to complete, it has been mooted the season could be kicked off from a later round, with a formula to devise points-per-games applied for previous rounds.

This, in itself, would likely prove highly controversial, however.

One country which will have domestic rugby back soon is New Zealand, with the five Super Rugby franchises playing a round-robin format from June 13 – something which could prove a case study for the rest of the world in terms of return-to-play. Albeit, New Zealand is a country out of lockdown, with a population shy of five million and one which suffered just 21 deaths from coronavirus.

England in Japan? A fight for October?

Were the Premiership final to have gone ahead as planned on June 20, the next port of call for England Rugby would have been the national side’s summer tour to Japan for a two-Test series in July.

Eddie Jones’ charges were due to take on the Brave Blossoms in Oita on July 4 and in Kobe on July 11, but after a period where all of the summer’s Tests were coming under increasing doubt, World Rugby ultimately took the step of postponing all scheduled fixtures last Friday.

As well as England’s tour to Japan, Wales, Ireland and Scotland had trips to New Zealand, Australia and South Africa respectively called off.

Contingency plans as to when these tours might now go ahead are, quite naturally, up in the air. But October has been mentioned as a potential window – indeed, RFU chief executive Bill Sweeney has mentioned as such.

With November already scheduled as a bumper month of Test rugby, however, and four Six Nations fixtures to fulfil from the interrupted 2020 championship – something which had been thought possible for October also – finding feasible space and time for each backlogged fixture will now prove an enormous challenge.

Indeed, the final round of Six Nations fixtures between Italy vs England, Wales vs Scotland, and France vs Ireland had been linked to October 31, with Ireland’s Round 4 Test with Italy speculated for the previous weekend of October 24.

Quite how World Rugby and each union would propose to fit in seven to eight weeks of consecutive Test rugby between both hemispheres remains to be seen.

And that is even before entering into the equation that domestic competitions such as the Premiership, Top 14 and PRO14 should be back underway by then, while the EPCR have released tentative plans to stage this season’s Champions Cup quarter-finals in October also.

Summer tours, Six Nations, Premiership, Top 14, PRO14, Champions Cup – they can’t all be in October. Several will have to give. Many begrudgingly, if at all. And then there is a packed November window straight after.

All of this is being thought about and discussed during a time when there is still zero certainty too. But what is certain, is finishing and honouring this season’s fixtures will prove a vastly difficult conundrum for organisers.