Home Lifestyle ‘I Should Be Good at This’: Agoraphobic People Are Suffering Through Quarantine... 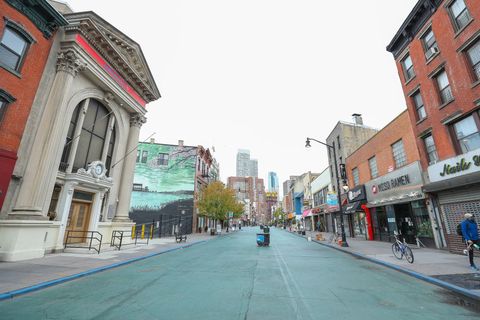 When social distancing guidelines were first introduced in the Pacific Northwest, Phoebe’s family thought she would be fine. “I’m super introverted,” she said, “I am perfectly happy at home with my cat and a book.” But the 25 year old, who, like others interviewed, requested her last name not be used in order to protect her privacy, has also struggled with agoraphobia.

An anxiety disorder characterized by extreme fear and avoidance of places or situations that might cause adverse reactions like panic attacks, agoraphobia often makes it difficult to leave home. While the pandemic has forced entire societies indoors and made going outside fear-inducing across the board, it can exacerbate agoraphobia at a time when one of the most effective techniques for treatment is severely restricted.

Cognitive behavioral therapy (CBT) focuses on exposure, first to the sensory components of anxiety (like dizziness or shortness of breath) and then to environments that trigger those reactions (like coffee shops or crowded malls). “Unlike the part of the brain that locks into danger, the part that locks into safety is fragile,” said Dr. C. Alec Pollard, who directs the Center for OCD & Anxiety-Related Disorders in Saint Louis and co-authored The Agoraphobia Workbook.

“It’s like a muscle. I worked hard to build that muscle back up…I don’t want to let it atrophy.”

Avoiding exposure, as in the case of those forced to stay home due to COVID-19, is “the number one threat to people’s recovery,” Pollard said, because “as safety learning weakens, the danger learning overtakes it…[and] you have the potential for backsliding.” Though she’s progressed beyond exposure therapy, Phoebe worries that staying home for an extended period will threaten her hard-won progress.

Panic disorder and agoraphobia often co-occur, and after developing both as a teenager, there were times when Phoebe wasn’t even able to step foot into the backyard of her childhood home. “Twice as many women have agoraphobia and it’s much more likely to be severe for them,” said Dr. Karen Cassiday, a psychologist who owns and serves as the managing director of the Anxiety Treatment Center of Greater Chicago. There is evidence of a genetic predisposition to anxiety; when it comes to agoraphobia, “the bigger the genetic contribution, the less you need from your environment to trip it off,” Dr. Cassiday said. Other factors like trauma, environmental stress, and temperament seem to play a role too.

Phoebe’s progress wasn’t always linear, but with the help of a therapist willing to start treatment at home and an extended stay at an in-patient facility, she now considers herself “in remission.” She’s been doing well, living independently and holding down a job, at least until mass layoffs in the hotel industry put her out of work on March 21.

“Something that is very important to keep myself healthy and sane and from falling into a relapse is to have a schedule that keeps me going out of the house,” Phoebe said. “It’s like a muscle. I worked really hard to build that muscle back up again and I don’t want to let it atrophy.”

Julianna De Pascale used to spend hours each day on Google Maps, using the Street View feature to travel farther and farther from her home in Montreal. She developed agoraphobia at 12, and before working with a therapist, this sort of DIY exposure therapy helped her practice when the thought of leaving home and riding in a car filled her with panic.

Now 16, she’s afraid the pandemic will trigger a relapse. Except for trips to get necessary essentials, she has spent the past several weeks at home, where she’s noticed an increase in negative thought patterns. “I was thinking of everything I wanted to do once this is over,” she said. “I was thinking about restaurants and places to go and then I had these little thoughts pop in, like, Aren’t you scared? What if you get a panic attack if you tried to go?”

These days, Phoebe is leaving only once a week for groceries and has to keep reminding herself not to feel guilty for staying in, a sentiment Catherine Noel, 30, said is widespread. “A lot of us with agoraphobia are saying, ‘thank goodness,’ like, finally I can be comfortable. Finally I can be in my house and not have a bad feeling about it.”

“A lot of us with agoraphobia are saying, ‘thank goodness,’ like, finally I can be comfortable.”

The assumption that everyone with agoraphobia is happy at home is a “big misunderstanding” about the disorder, Noel told me. While home can feel like a safe space, it’s also a site of pain—shame, isolation, boredom, and profound anxiety about the next panic attack or grocery run. De Pascale described how depressing it was to watch her friends’ lives carry on via social media when she was homebound. “I would literally have dreams of just going out to the pharmacy,” she said.

Not everyone with agoraphobia is homebound, but those who are operate in what Dr. Cassiday called “a very small circumference of safety.” That may allow someone to travel on a certain road, go to one specific supermarket, or visit shops within a given number of miles, but even that can be incredibly fraught. In the most severe cases, leaving home at all isn’t possible.

An empty street an New Jersey, where schools and most businesses remain closed. For some people with agoraphobia, the quarantine has set back their progress with treatment or getting full-time jobs outside the home.

Noel isn’t homebound, but getting out of the house is a struggle. After a multi-year period she described as “one of the lowest points of my life,” she began doing CBT last year. A few months ago, she got into a good routine: taking her kids to school, grocery shopping, and even swinging by Starbucks. Then she got a part-time job decorating cookies at a nearby bakery, a huge accomplishment.

But before her first day, schools closed in Bergen County, N.J., forcing her to stay home with her two kids instead of reporting to work. “I heard quarantine and I thought to myself, ‘I should be good at this,’” she said. “Not leaving the house, that’s my thing.”

It’s a relief to wake up and realize she doesn’t have to leave. But she misses her routine, more than she expected to. She’s been told that her job will be waiting for her, but Noel worries that after spending so much time at home, she might not be able to take it on when the state re-opens. Still, she’s incredibly proud of the progress that made getting a job feasible in the first place.

Phoebe isn’t just worried for those coping with the disorder. “You can’t keep an entire society inside for weeks on end and expect things to be fine,” she said. While her past confinement was agoraphobia-induced, it’s given her insight into what others may be suddenly experiencing because of COVID-19 restrictions. “I’ve been there,” she said. “I know what that can do to a person.”

Dr. Cassiday said she’s already noticed what were previously “little twinges” of agoraphobia “firing up” in patients whose symptoms don’t rise to the level of a diagnosis. She predicted a surge in cases; among the mental health professionals I spoke to, there wasn’t a consensus on whether quarantine would lead to a spike in the disorder. But they did agree on the efficacy of treatment and expressed confidence in their ability to help agoraphobic patients through this especially difficult time.

“I heard quarantine and I thought to myself, ‘I should be good at this.'”

The impact of COVID-19 lockdowns extends to people with agoraphobia who are homebound, even if it seems their lives wouldn’t change much. Charisma, 36, gets groceries delivered, Skypes into therapy sessions, and attends graduate school online. She’s been intermittently homebound, most recently since October. She tried to go outside on March 21, a few hours before Illinois’ stay-at-home order went into effect, but found the sidewalks crowded. Crowds have long been a trigger for her, but COVID-19 amplified her fears. She made it about half a block, had a panic attack, and “scurried home.” Home has also become more challenging. Suddenly hearing all her neighbors in their apartments has increased her stress level; she’s started having panic attacks even at home.

For Krista Hilfiger, 45 and homebound for the past nine years, it’s been frustrating to see the services she struggled to access spring up so quickly in the wake of the coronavirus. Over the years, she’d only found one doctor willing to use telemedicine; because of the coronavirus, it’s suddenly everywhere. “Watching the news when this pandemic rolled in, I became more angry, resentful and bitter,” she said. (Dr. Pollard, who used telemedicine with patients before COVID-19, is hopeful that its widespread availability will continue after the pandemic ends.) 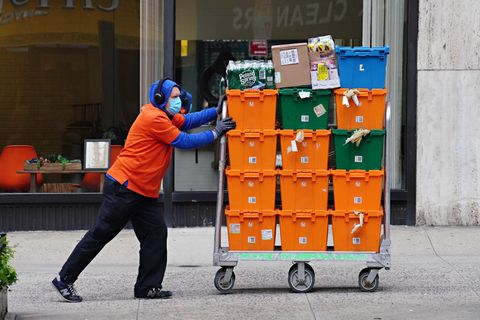 Groceries are delivered in New York City. Charisma, 36, has relied on grocery delivery services and the ability to Skype into therapy sessions while coping with her agoraphobia.

Hilfiger went from holding a job reliant on networking to being confined to a small area around her home. She’s finding it difficult to watch the outpouring of sympathy and support for people newly stuck inside when she’s felt little of that over the years. While it has radically altered her life, she’s adamant that the disorder does not define her. “This is not me at all,” she said. “It’s like some separate entity named agoraphobia is out to get me and doesn’t want me to succeed.”

Under normal circumstances, going to the grocery store is terrifying and exhausting but doable. Now, because she’s immunocompromised, Hilfiger hasn’t gone in weeks. She considers New York’s stay-at-home order a much-needed break from the outside world. When I asked whether she was afraid of losing the progress she’s made, her answer surprised me. “I was hoping that I would just blend in with everybody,” she said, laughing. “[We’d] come out of our houses and [I’d] just kind of sneak in and blend in with them again.” After we got off the phone, she texted a photo of her business card from nearly a decade ago, adding “that was me.”

Most people stuck inside right now are eager to leave home. But for many who’ve struggled to get through the front door or found visiting a coffee shop excruciatingly stressful, it’s not just a matter of when going outside regularly is allowed again, but if it’ll be possible.