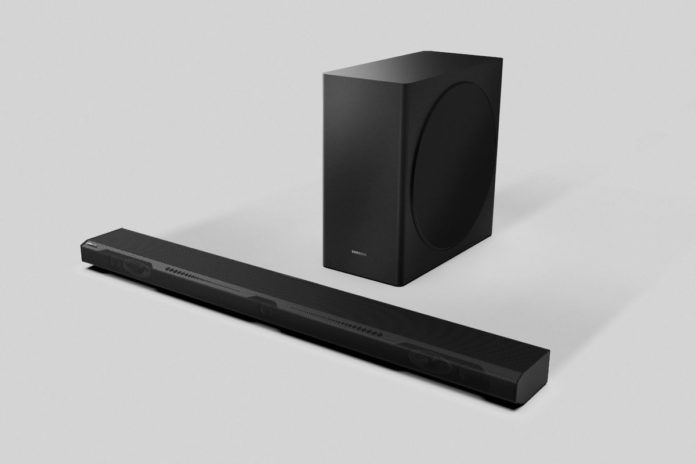 Having already taken the wraps off its 2020 soundbar lineup at CES back in January, Samsung says it’s about to start shipping its new and improved soundbar models, including a high-end version with upfiring drivers and the ability to complement your Samsung TV’s speakers.

Samsung’s latest soundbars, including its high-end Q series, its entry-to-mid level T series, and its new “music-centric” S series, will start to go on sale “throughout the spring,” starting in May.

Among the Samsung soundbars that are slated to arrive soon is the Q800T, a 2020 CES Best of Innovation award winner with 3.1.2-channel audio, a wireless subwoofer, and support for Q-Symphony, a feature that allows the soundbar to sync up with the “object-tracking” sound in Samsung’s latest, six-speaker 8K TV sets. Other soundbars in the Q series will also support Samsung’s new Q-Symphony feature.

Besides its Q-Symphony support, the Q800T (which Samsung now says will retail for $900) will also boast Samsung’s Acoustic Beam Technology for more “panoramic” audio, along with upfiring drivers that allow for 3D object-based Dolby Atmos and DTS:X sound, and eARC support for lossless audio via HDMI (assuming your TV is also compatible with the eARC standard). A wireless surround speaker kit will let you upgrade the Q800T’s 3.1.2-channel audio to a 5.1.2 configuration.

Another Q series soundbar that’s set to arrive soon is the $700 Q70T, which shares the Q800T’s Q-Symphony, upfiring drivers, and eARC functionality. Samsung has yet to detail the differences between the Q800T and the Q70T, although it’s a safe bet that the Q70T’s feature set is pared back compared to the pricier Q800T.

Besides its Q series, Samsung is also touting its new “music-focused” S series soundbars, including the $330 S60T, which features (according to Samsung) a “wide-range tweeter attached to the horn-shaped speaker.” The new S series soundbars will come with the same Acoustic Beam technology as Samsung’s Q series models, along with “pretty deep” bass, although you’ll be able to up the low-frequency response by adding an optional wireless subwoofer.

Also shipping soon is Samsung’s T series of entry-to-mid level soundbars, which will range in price from $200 to $700. At least two of Samsung’s T series models—the 3.1.2-channel T650 and the T550—will feature DTS Virtual:X, a virtualized 3D audio mode that simulates surround and height effects without the need for upfiring drivers. The T650 and the T550 will retail for $400 and $280 respectively.

Samsung previously revealed that its 2020 soundbars will boast shorter and narrower form factors, making them easier to fit beneath the legs of a TV, while a “number” of its new soundbars (including the Q800T and the S60T) will come with Alexa onboard.

11 Ways to Style Long Hair, According to Some of the Most Stylish Celebrities on the Planet

To move forward, Siri needs a lot of attention

Patty Jenkins Reveals Why She Turned Down a Justice League Movie