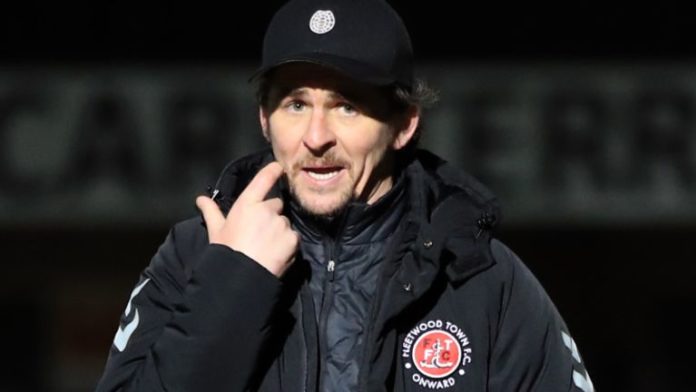 Barton admits he feels sorry for Sunderland and Peterborough over play-off proposal; League One is set to be decided on unweighted points-per-game after the latest EFL board meeting

Fleetwood manager Joey Barton says the conclusion to Sky Bet League One must be balanced and he would like to finish the season, but admits some clubs will feel aggrieved at the proposals.

Following the latest EFL board meeting, League One is set to be decided on unweighted points-per-game with play-offs then expected to decide who is promoted alongside the top two teams.

The League One teams have been in open disagreement about how to finish the campaign, with Barton and Fleetwood wanting a full conclusion to the season, but the manager understands why some may not want to risk the future of their clubs.

Speaking on The Football Show, Barton said: “I’d prefer to finish the campaign, we’ve been quite vocal about that from the start. We believe we could have got [one of] the [automatic promotion places], I think we’d had one defeat in 17, unbeaten in 12 and been away to every side who had a chance of winning the league.

“We had to play nine games, six of those were in the bottom 10, three of those six were in the bottom three – you’d argue Bolton and Southend were already down and probably only Tranmere fighting for survival there – so we felt like we had a shot at the automatics, we were two points behind Rotherham with them to play at home.

“We’re disappointed in this but we will get a chance with a play-off situation and I do feel sorry for Sunderland – I never thought I’d say that – but I do feel sorry for them, I feel a bit aggrieved for Gillingham, Doncaster and even Ipswich probably because they all would have had a legitimate shot at a play-off place. Peterborough, who are a very good side, it looks like if they do a points system they will miss out [along with Sunderland] and Wycombe will jump in with Oxford, Portsmouth and ourselves.

“They’ve got no crowds in, which is a huge part of the revenue streams for those types of clubs. They’ve obviously now got a government-backed furlough scheme where they can recoup a percentage of the salaries while the crowds aren’t in and the likes of Accrington and Rochdale, they’ve seen Bury go out of business last year, Bolton almost went out of business too, and you can understand them wanting to protect their football clubs because of the impact those clubs have on the local community.

“I’m not here to tell anybody they should do one thing or another, but I would say is you start the season with the aim of playing the 46 games and I think you should adhere to that…. If we’re not careful, we might not have football clubs to come back to so we’ve got to find the balance between what is right for everybody, but also what is right for the integrity of the competition and I think it’s important to finish the competition if we start it.

“Hopefully we do that and there are going to be winners and losers in this. I think Tranmere will be aggrieved going into League Two next season, Sunderland, Peterborough and a few other sides will be aggrieved and the winners will probably be Wycombe in that scenario, getting in [to the play-off places] and Rotherham have won the lottery getting second because I think they had six of the top 10 to play in the last period.

“So it’s not fair for a lot of sides but on the other side, this is a global pandemic and we have to resolve it one way or another for the sanctimony of the competition.”

Ainsworth: We still had plenty to play for

Wycombe Wanderers would jump five places up the League One table if points-per-game is implemented, but manager Gareth Ainsworth echoed Barton’s thoughts and would like to finish the full complement of remaining games.

Also appearing on The Football Show, he said: “We still think we had a good chance on the pitch of getting one of the automatics. I watched Joey earlier and my sentiments are the same as him. We have 10 games to go, we have seven in the bottom half of the table, we have been in the top two more than any other club this season – 20 weeks in total.

“And the only reason we dropped out that top three is we had Bury scheduled the week before the lockdown. So everyone has passed us, we were ready to play Burton the next Saturday and everything gets called off. Rightly so, by the way, I am not saying it should not be.

“So we still had plenty to play for on the pitch and again, Joey and Gary (Neville) alluded to it this morning – cost and finances are now a huge issue for clubs playing on. My own are included.

“So from a competitive point of view, give me the 10 games we have remaining because I believe we will finish at least in the playoffs, if not an automatic. But it has to be safe, everyone has to be safe before we come back.

“And we cannot be putting clubs out of business as has been alluded to as well. It is just not the right thing to do. So obviously I’m happy with the points per game because we do end up in the playoffs, but believe me, there is no way I wanted to stop the season. We were back in form, had some good players back to fitness and looking forward to challenging for these top two spots.”

Carra: Teams must come together

Sky Sports pundit Jamie Carragher called for unity among clubs as the argument rages on over how to finish the current campaigns and dismissed the idea the Championship could break away from the EFL.

“I do not think this is a time for leagues leaving each other and splitting up. This is a time, if possible, to try and come together,” he said.

“We have talked so much about self interest in deciding matters and of course there is self interest in every league up and down this country in terms of what leagues should do: should they stop now, points per game, carry on. Everyone has their own self interest.

“But in terms of football clubs financially and keeping clubs going, everyone should come together and help each other, so I would not like to see the Championship move away and make a Premier League 2.

“There has been a lot of noise in the past from the owners of Leeds and West Brom trying to align themselves more with the Premier League and that would just be for financial [reasons].

“At times they have also had issues with Sky and how many games are played and how the money is divvied up and different things like that.

“But I certainly do not think it is the time for the Championship to be leaving the EFL.”