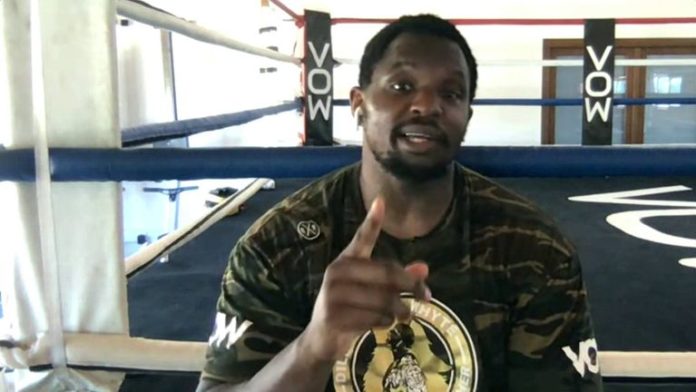 “Me and Tyson Fury sparred and I bashed him about and dropped him on multiple occasions. Simple as that”

Dillian Whyte says he “bashed” Tyson Fury in sparring – and issued a “let’s go” challenge to his British rival about their mandatory WBC heavyweight title fight.

Whyte has already secured a shot at the WBC belt by February 2021, but voiced his frustration about being made to wait until after Fury’s third contracted fight with Deontay Wilder.

The Brit duo have shared the ring before in sparring sessions and Whyte reignited his war of words with Fury by suggesting he floored his fellow Brit on “multiple occasions”.

“He just needs to stop talking rubbish and let’s have a go. It will be a major fight. Let’s have it out,” Whyte told The Boxing Show on Sky Sports News from his training camp for the rescheduled Alexander Povetkin fight.

If I was such an easy fight, why is he not in any rush to fight me?

“He’s the one that come out and said he beat me up in the gym and stuff like that. I can tell you now, that didn’t happen. I don’t like telling sparring stories, but people in the game know. They know about me.

“Well, me and Tyson Fury sparred and I bashed him about and dropped him on multiple occasions. Simple as that.

“If I was such an easy fight, why is he not in any rush to fight me? He said before beating Wilder, when I beat Wilder, I’m going to give Dillian Whyte his title shot. He just talks rubbish.

Fury is open to an undisputed world title fight with Anthony Joshua, but acknowledged his WBC commitments to Whyte.

Speaking to Sky Sports, Fury said: “I’ve got this Wilder rematch, and then we’ll hopefully get the Joshua fight on, but if that fight doesn’t happen, then yeah, we’ll take on Dillian Whyte. Give him a beating. Why not?

WBC president Mauricio Sulaiman has reiterated Whyte will receive his guaranteed fight with Fury by the original deadline, despite the sport’s schedule being disrupted by the ongoing coronavirus pandemic.

He’s the WBC ‘interim’ champion and the date that was set for the next mandatory is February 2021 – and that’s the way it stands right now.

Sulaiman said: “Well he is the mandatory contender. He’s the WBC ‘interim’ champion and the date that was set for the next mandatory is February 2021 – and that’s the way it stands right now.

“The WBC is going to look at every single weight category, with the championships and with the mandatories, and every single situation that has to do with each particular situation regarding this pandemic, but Dilian Whyte is the mandatory for February 2021.”

Whyte’s promoter Eddie Hearn believes Fury should defend his WBC belt against the Brixton man next, if Wilder is ruled out after bicep surgery, but wants the WBC to stand by their promise to deliver a WBC mandatory shot by February.

Eddie Hearn on Whyte against Fury

Come on @Tyson_Fury you stole my mandatory @WBCBoxing fight me are you a King or a coward like @BronzeBomber let’s fight @EddieHearn I’m ready @vow_nutrition
Let’s go #BodySnatcher pic.twitter.com/g1grWMUu29

“The big problem in the whole mix is Dillian Whyte, who is mandatory before the end of February for Tyson Fury,” Hearn told Sky Sports.

“We’ve got to push that with the WBC. Whyte has been ordered that he must fight for the WBC title before the end of February, so that is a major problem for them.

“I would love to see Fury step-up and fight Whyte, but I understand he has contractual obligations with Wilder. Dillian is right in the mix and we will fight his corner. We’ve been promised by the WBC and we expect them to stand by it. We’ve done all we can, in that respect.

“He stayed patient and has been given a time of February 2021. It is public, so they will look very silly if it doesn’t happen.”

Sulaiman insists the WBC cannot encourage Fury to face Whyte next, but reiterated the deadline for the WBC mandatory title fight.

He said: “No, the date is February 2021. Wilder rematch with Fury is a contractual situation that they have.

“That’s their own contract, their own situation, legally. For the WBC, the mandatory is Dillian Whyte for the time that was stipulated.”