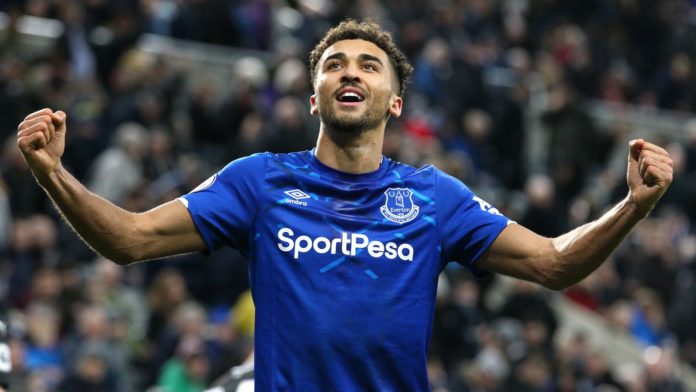 Everton striker Dominic Calvert-Lewin looks back at his footballing roots, where his love for the game came from and who he idolised playing on the streets of Sheffield.

From breaking through at his boyhood club Sheffield United, to making the tough decision to leave the Blades for Everton, the 23-year-old has overcome many obstacles on his journey to Premier League hotshot.

Here, Calvert-Lewin sits down with Soccer AM‘s Adam Smith to reflect on his career, in association with EA Sports FIFA 20…

At what age did you first pick up a football?

I first joined a team aged six or seven, and from there I didn’t really look back. I always had a ball at my feet and tried to play football wherever I could; whether that be in the back garden, in the house smashing things all the time and my mum going mad at me all the time for breaking stuff.

I used to play with a tennis ball, I’d find any way to play and always loved football.

Who did you want to emulate growing up?

I can remember watching Spanish football at my dad’s house, I remember just watching Ronaldinho and thinking, ‘that’s what I want to be’.

For me, he’s the best player of all time and is still my favourite player. Watching him as a young kid, he always had a smile on his face and enjoyed the game. That is my first memory, that football is fun.

What was it like signing for your boyhood club?

It was unbelievable. I made my debut against Leyton Orient away, I’d not been a centre-forward that long to be honest, and Nigel Clough threw me on.

I didn’t quite grasp the knack of being patient as a centre-forward because I was used to being a central midfielder and chasing people down.

He ended up having a go at me for running around too much and chasing back, when really, I should have been at the top of the pitch waiting for the ball.

Those are the kind of things that I remember and learn from but playing for Sheffield United was a massive achievement for me.

‘Too good to turn down Toffees’

You could argue that I was in Sheffield United’s first team and then went to Everton’s U23s. At the time it was a toss-up between [the move to Everton] being either a backward, sideward or forward step.

I was training with the first team two to three months after joining Everton, I made my England debut the same week and things just started to click.

I don’t feel like I did myself justice at Sheffield United, I feel like could have done more and there was a lot more to come.

When the Everton transfer came along, Sheffield United fans said they would walk me there, and as a young lad hearing that I thought, ‘fair enough, I’m going to go to Everton and prove you all wrong’. I like to think I’ve done so.

‘Believe in the process, believe in yourself’

That was the toughest time of my life, adjusting to the mental battle of playing first-team football. That is something you come to grips with when you have experience, and I am grateful I’ve had family around me to help me along the way.

There is nothing that can prepare you – tactically, technically, training and growing as a young kid – for the mental battle. I’ve got a lot of respect for the top players that deal with it on an even bigger scale.

I get it to a certain level as my profile grows, but it doesn’t matter how high you get, you will always get that criticism because you cannot please everyone all of the time. It’s all about believing in the process and believing in yourself.

Social media: You’ve got to be bulletproof

I don’t use Twitter, I’m more of an Instagram person. With social media nowadays you could finish a game, go on Twitter straight away and, if you want to, you can judge how you played on other people’s opinions.

As a player, I always think you know how well you’ve played. You know what you’ve done right and what you’ve done wrong. If you always go off that, trust what you know and trust the small circle around you. If you take advice from them and the people that matter, you can’t go too far wrong.

It’s all about not getting caught up in what goes on, I always say you’ve got to be bulletproof and block things out, focus on what’s important and the rest, as they say, will take care of itself.