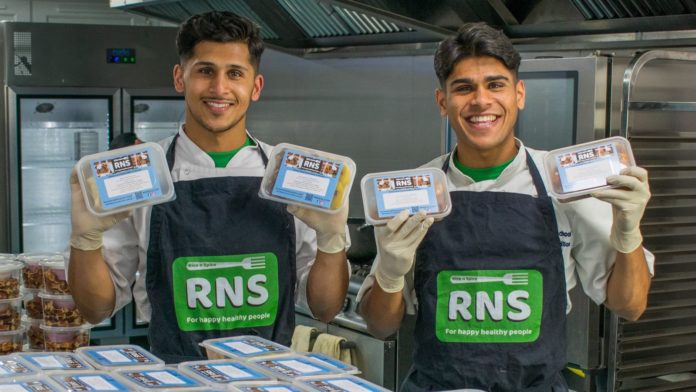 Jhai Dhillon had a dream his career as a professional footballer would allow his mother to take early retirement. Instead, it was the bold decision to cut short his football ambitions and launch his own meal preparation business that has turned his dream into reality.

His 49-year-old mother Kal quit her job at Tesco in December.

It is an indication of the success the former Chelsea youth player and Stevenage professional has enjoyed with Rice n Spice – providing healthy meals from the family home in Hitchin.

The team is now 16 strong and Dhillon’s high-profile customers include Norwich full-backs Max Aarons and Jamal Lewis, Premier League winner Demarai Gray, and the striker widely regarded as the strongest man in football, the beast himself, Adebayo Akinfenwa.

Dhillon’s success, in partnership with younger brother Simmy, came from identifying a gap in the market – one that is particularly appealing to those in his old line of work.

“When I was at Stevenage there were so many players who were paid athletes in League One who did not have a clue what they were supposed to be eating,” he tells Sky Sports.

“Lots of people don’t have time to cook and prepare meals and a lot of people don’t know what to cook and prepare. It takes away the guess work on their part. Clients can add a goal for their meals – for example, muscle gain or weight loss. Then they can select their meal, how active they are, their weight, and we can tailor the portion size to them.”

Dhillon’s contacts in football have been useful in raising awareness about his new venture because for a long time these players were his peers. He had envisaged a long career in the game – “until I retired at 35 or whatever” – but soon became disillusioned by it.

“I left school at 16 and went straight into the youth team as a scholar at Stevenage,” Dhillon explains. “I enjoyed my scholarship so much and when I got offered a professional contract I had achieved what I wanted to achieve – I had technically become a professional footballer.

“But it did not fulfil me like it should have done. I found myself wondering where I could go from there. I felt like I could never really be one of the best in the world at football.

“Meanwhile, my brother decided that in his first year at university he would operate from his university kitchen. He operated that as a takeaway and that got really big on campus.

“He knew that I was not enjoying football as much at that time so he suggested I should start something up with mum at home. I was not that into it at first but when you think of the life of a footballer you are usually home by 2pm so after a while I thought that I may as well use my time constructively and give it a go. It has grown from there really.

“My love of the business has taken over from my love of football in a way. It has replaced that gap and given me something to put my energy into. I could not make it to the top as a footballer. Now I feel like we can genuinely be the best in the world at what we do.”

The lockdown caused by the coronavirus has presented challenges but such has been the success of their business that Dhillon has felt in a position to give something back.

“We donate meals every week to our local NHS hospital, the Lister Hospital in Hitchin,” he says. “We go in every weekend and donate meals to different wards. That is what we have been doing for the past nine weeks since lockdown started.

“Every week for the past 10 months, we have donated meals to a homeless shelter,” he says. “We have partnered with an incredible local charity called ‘Feed Up Warm Up’ who distribute our meals to the most vulnerable.

“In addition, since the beginning of lockdown we have been making regular meal donations to our local hospital, the Lister Hospital in Stevenage.

“We also offer discounts for key workers because when they finish work the last thing they want to do is go to the supermarket when they are working ridiculous hours already.

“We are still operating at a profit, however, costs have risen since COVID-19 which has hurt the business. Even still, we are happy to take the hit on discounts for key workers because without them things would be all over the place. They do not get the credit they deserve. It is just a small thing that we can do and we are happy to do it.”

Prior to the lockdown, Dhillon was playing semi-professionally for local team Hitchin Town and he intends to resume playing soon. But his relationship with the game has changed.

“I don’t think of it as a job any more,” he says. “I just have fun because the business is my job now. Football is just for enjoyment again rather than the pressure of making money.”

For Dhillon’s mother, that pressure of making money is over for good.