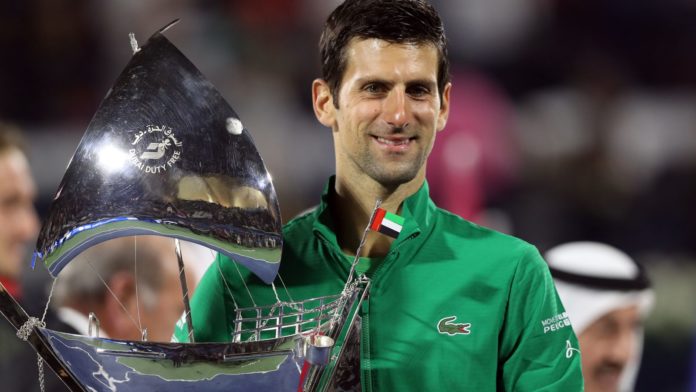 World No 1 Novak Djokovic will headline an eight-player tournament to be held in the Balkan region next month.

The ATP Tour will not resume until August at the earliest due to the coronavirus pandemic which forced all professional tennis tours to be suspended in early March.

World No 3 Dominic Thiem and Grigor Dimitrov, ranked 19, will join the 17-time Grand Slam champion in the Adria Tour which will run from June 13-July 5.

Players, including Djokovic, have returned to the practice courts while maintaining strict hygiene and social distancing regulations, and some exhibition events without fans have also been held in countries like Germany and the United States.

“I’m proud to officially share the news that the #AdriaTour will be held across the #Balkans 13 June – 5 July kicking off with a tournament in Belgrade,” Djokovic, who turned 33 on Friday, said.

“Very grateful we could make this happen to play and support humanitarian projects across the region.”

The series of matches will end with Djokovic’s exhibition match against Bosnian Damir Dzumhur in Sarajevo, the capital of Bosnia and Herzegovina.

Zadar, in Croatia, Montenegro and Banja Luka in Bosnia will be the other venues for the event, which will raise money for various regional humanitarian projects.

Meanwhile, Sofia Kenin and Bianca Andreescu will be among 16 women’s players to compete in Charleston next month in the largest event held since the season was derailed by the coronavirus crisis.

American Kenin, who won this year’s Australian Open, and Canada’s Andreescu, the 2019 US Open champion, will take part in the Credit One Bank Invitational, which will begin on June 23.

The 16-player event, which will be held without fans and feature 16 singles matches and eight doubles contests, will be divided into two teams with American pair Madison Keys and Bethanie Mattek-Sands serving as captains.

Charleston hosts the WTA’s Volvo Car Open annually in early April, but organisers were forced to cancel this year’s event due to the pandemic.