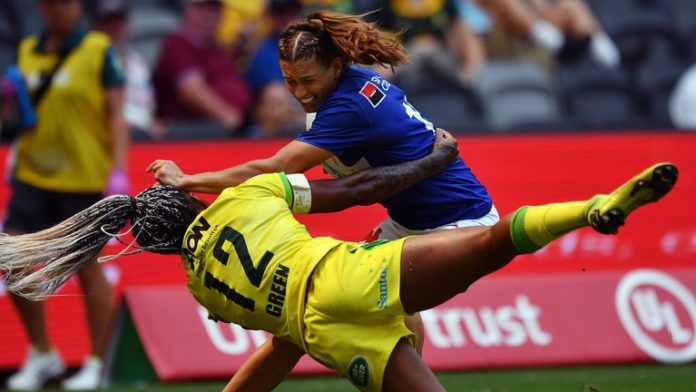 The Series has been postponed due to the coronavirus with London and Paris provisionally pencilled in for September.

However, the format of the series has come under scrutiny as the organisers look to develop the game with six of the ten men events being combined with the women events. This has been met with mixed reviews as it means the format at some events has been changed to cater for the extra games.

In Hamilton and Sydney, there were no quarter-finals meaning that the four pool winners automatically jumped straight to the semi-finals. This decision was met with anger from coaches and players, with some even considering taking their grievances to the Court of Arbitration for Sport.

Danielle Waterman agrees that the format needs looking at but says that women playing at the men’s events is vital to help grow the game.

“All players – men or women – want to want to be playing in front of big crowds with atmosphere and showcasing what they can do,” said Waterman on the Sevens Special podcast.

“The Women’s Tournament isn’t at a place where it can be standalone. We are not going to attract the crowds that the men get. Therefore putting them in with men acts as a shop window. It can work and It needs to work to grow the game for everybody.

“Standalone tournaments can work if you give them the resources and time to grow. Langford in Canada is a really good example of that. They have actually outgrown that stadium now and it has always been a standalone tournament but it has been given time and that consistent support.

“Because there has been so many changes, the women’s game has never been able to grow properly so I think if we are a looking in reformatting the tournament, then it needs to be with a long-term approach and properly backed.”

Ben Ryan disagrees and thinks the current format is too long and put more pressure on the organisers.

“Men’s and women’s hasn’t worked this year, I love Sevens but I’m not going to sit and watch over 70 games of sevens in a weekend – it’s too much, it’s overkill. It’s a long day for the players.

“It put pressure on the tournament organisers who had 30 per cent more cost, but no extra revenue, it wasn’t selling more tickets.

“I think the women’s game does need to be standalone. Langford and Biarritz have proved that, there is no reason why the women couldn’t be parachuted into some of the bigger tournaments.

“I get why World Rugby wanted to combine them but it’s done a disservice to the women’s game.”

With 17 countries taking part in the men’s event and 14 in the women’s, Waterman agrees that there are too many games and would like to see the number of countries competing split into two groups.

“Do we need to have all of those teams in the Series?

“You could have two groups of eight teams (men and women). The top eight play in the main stadium, the second tier of eight play outside the stadium and their finals gets put into the main tournament. You earn the right to be in the top tier.

“Changing the numbers would allow men and women to combine. If you are going to engage with the Rugby Community, having men and women together allows people to experience it.”