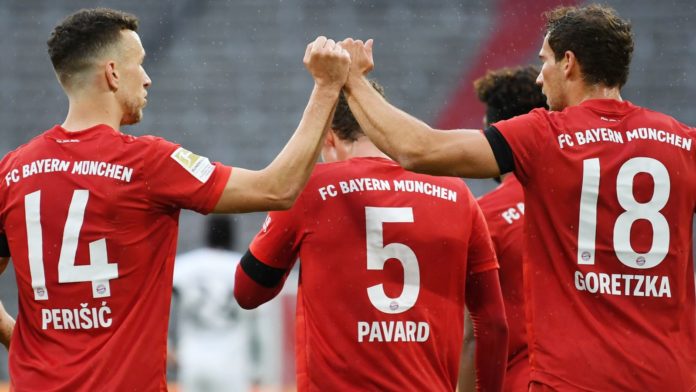 Bayern Munich and Borussia Dortmund both showed their best and worst sides this weekend ahead of Tuesday night’s Klassiker.

Dortmund are more than just Haaland

You’ll probably be surprised to hear that Erling Haaland had a quiet game against Wolfsburg. Yes, he made the runs and you could not fault his work rate, but for someone who has set the Bundesliga alight with 10 goals and three assists since January, he did not live up to his own billing on Saturday.

But this gave Dortmund the chance to prove they are more than just their 19-year-old superstar and other players were able to show what they can contribute.

Achraf Hakimi, Thorgan Hazard and Julian Brandt linked up superbly well, especially in the first half. It was the trio that strung a mesmerising series of passes together to help set up the first goal for Raphael Guerreiro, who also used his own skills and tricks to impress.

The trio linked up again just before the break when it appeared Dortmund would nab a quick second, but Hazard couldn’t quite get his finish right. He did come away with an assist for the first goal though, and enjoyed a good day’s work nonetheless. Real Madrid loanee Hakimi also deserved his goal – assisted by substitute Jadon Sancho – with a thunderous strike into the bottom corner.

Of course, it must be pointed out that Haaland was in and around both goals – uncharacteristically slipping over in the middle for the first and waiting on the left-hand side for the second after a brilliant supporting run – but it was his team-mates who shone at the Volkswagen Arena and proved that football really is a team sport.
Charlotte Marsh

Last weekend’s Bundesliga return saw Bayern Munich rack up their 50th goal of Hans Flick’s short tenure in just his 16th game at the helm. That was already the fastest that milestone has been reached under any head coach in Bundesliga history, and the league leaders continued their charge towards 100 goals with another five against Frankfurt on Saturday.

True, few backlines will be so generous to tee-up Alphonso Davies for an open goal, and even begin scoring for Bayern by the end of the 90 minutes. Realistically though, it could have been eight or nine for the relentless hosts, who now only need to score nine goals in their final seven games to better their tally from last season – and you’d bet your house they will.

The fact five different scorers found their way onto the scoresheet too, albeit one of them Frankfurt defender Martin Hinteregger, will please Flick no end. His star striker Robert Lewandowski moved level with Ciro Immobile as the top scorer across Europe’s top-five leagues with his goal against Frankfurt, but having scorers across the pitch puts Bayern in an enviable position ahead of Tuesday’s Klassiker.
Ron Walker

Dortmund must be better for Bayern

Dortmund face a much sterner test on Tuesday evening when they host league leaders Bayern – and they will need to put in a far better performance than the one against Wolfsburg.

Despite winning 2-0 against 10 men, it was anything but a cruising performance, particularly in the second half. For the first half an hour after the restart, Dortmund barely had a look in and were only saved by some poor Wolfsburg finishing and a sensational save from Roman Burki.

A lot of their problems came down to the substitution of Mats Hummels at half-time, possibly to keep him fresh for Bayern in midweek. Dortmund missed the experienced defender almost immediately as Renato Steffen blazed over from close range and their defence looked to be struggling without his leadership.

They soon steadied the ship and went on to win the game with another goal, but it’s no disrespect to say Bayern will give Dortmund many more problems than Wolfsburg did. Lucien Favre’s team need to put in their best performance and barely got out of third gear at the weekend. They will want to avoid another 4-0 Bundesliga thrashing if they have any realistic chance of beating Bayern to the title this season.
Charlotte Marsh

…And Bayern must be better for Dortmund

For about 85 minutes, Bayern were scintillating against Frankfurt. They did not let up, they did not take their foot off the gas. But for the five minutes they did, they were nearly embarrassed.

Hinteregger’s two goals in four minutes, both from dreadfully defended corners, threatened to derail Bayern’s return to a four-point lead at the top of the Bundesliga, and what will annoy Flick more than anything else is how eminently avoidable both were.

Bayern cannot afford similar lapses in concentration against a Dortmund side far superior to Frankfurt, who had already lost their previous four games before Saturday. But if anything, Flick and his side may now be better prepared having seen a weakness highlighted so starkly by Frankfurt’s towering centre-back.
Ron Walker