Home Sport Cowboys ‘all hat and no cattle’ – time to deliver? 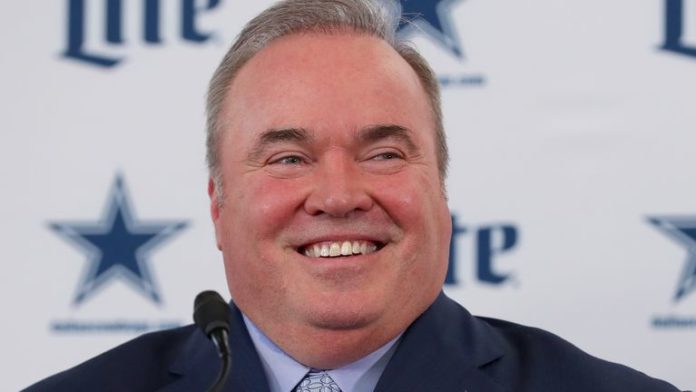 “They’ve done a great job on paper in the offseason. Now can they put all the drama, all the ‘America’s Team’ stuff behind them and just play football.”

The Dallas Cowboys are yet to reach the Super Bowl since last winning it in 1995, nor have they made it to an NFC Championship game since then.

It marks a new era for the organisation as they enter the 2020 season under a head coach Mike McCarthy, who succeeds Jason Garrett after he was fired at the end of last year.

Dallas finished the 2019 season 8-8 and consequently missed out on the playoffs having once appeared in the driving seat in the NFC East, all despite boasting the league’s No 1 ranked offense.

For Jeff Reinebold, it’s time for one of the NFL’s storied franchises to translate its pool of talent into success on the field once again.

“Complementary football, it’s something we talk about as coaches all the time,” said Reinebold. “Your offense has to play well so your defense can play well and special teams have to complement both sides of the ball. That was the area the Cowboys just didn’t play well last year.

“I’m often criticised as being a Cowboy hater and that’s not the case. I have great respect for the organisation but the Cowboys to me for the last 20 years have been ‘all hat and no cattle’, as they say in Texas.

“It’s like that shining beautiful car, you go to the Porsche dealer and he gives you a 9/11 and he puts a Volkswagen engine in it and that’s just the kind of way they are.”

The Cowboys bolstered their offense again in the NFL Draft by selecting Oklahoma wide receiver CeeDee Lamb with the No 17 overall pick, adding to the newly-extended Amari Cooper, Michael Gallup and star running back Ezekiel Elliott.

“If you just look at what they’ve done in the offseason you’d say this team is prepared to take over the division,” added Reinebold. “But they have to do it and that’s always been the issue with the Cowboys.

“In Texas they say ‘he’s all hat and no cattle’ which means he’s all show and can’t deliver. I think this is going to be a team that will have real high expectations coming into the season.

“This is too talented a football team not to make a playoff run. They’ve done a great job on paper in the offseason. Now can they put all the drama, all the ‘America’s Team’ stuff behind them and just play football.”

The Cowboys have their franchise quarterback in Dak Prescott, with the two parties still negotiating a new, and lucrative, long-term deal for the 2016 fourth-round pick.

Prescott was second in passing yards (4,902) and fourth in passing touchdowns (30) in the league last year, however continues to split opinion.

“Their offense finished second in passing in the league, I don’t know why he takes the criticism that he takes, I really don’t,” admitted Reinebold.

“Obviously when you’re the quarterback of the Cowboys you’re always going to be compared to Roger Staubach and Troy Aikman but I think he’s one of the best young quarterbacks in the league.”

Prescott was assigned the exclusive franchise tag earlier this offseason, which is reportedly worth around $31 million.

“I think he’s proven he can win in a lot of different ways,” added Reinebold. “It’s just like what Kirk Cousins said, ‘the tag is your friend’ so just do your job, take care of your business.

“This is a kid that has gone through a lot of turmoil in his personal life and he’s handled himself extremely well I think.”

On defense the Cowboys lost defensive end Robert Quinn to the Chicago Bears during free agency, but pulled off a potential steal when they drafted Utah DE Bradley Anae in the fifth round.

He and Gallimore follow veteran free agent tackles Dontari Poe and Gerald McCoy through the door, while outside linebacker DeMarcus Lawrence remains an integral component.

Third-year linebacker Leighton Vander Esch has meanwhile suggested he is fully recovered from the neck surgery he underwent at the back end of last year.

“This is going to be an interesting transition to see how this goes because it’s a philosophical transition that’s going to go on,” continued Reinebold. “Mike Nolan, the new defensive coordinator, is a guy that has a really big 3-4 background.

“In the past with (Rod) Marinelli it’s been all 4-3. One of the first things they did was go out and they get size. You get Dontari Poe who is 350 lbs and six-foot-three and McCoy next to him. You’re big now.”

Nolan will also have Aldon Smith at his disposal after the defensive end was reinstated by the league following an indefinite suspension for violation of the league’s personal conduct and substance abuse policies.

“I remember when I met Aldon Smith at the 49ers facility and I don’t get impressed too much with big guys because I’ve been around them for so long, but he’s different,” said Reinebold.

“He’s a different cat. If he can just get his life in order, I’m praying for him, because he’s an incredibly talented football player.”

Stay up-to-date with the NFL’s latest offseason storylines at skysports.com/nfl and on Twitter @SkySportsNFL.