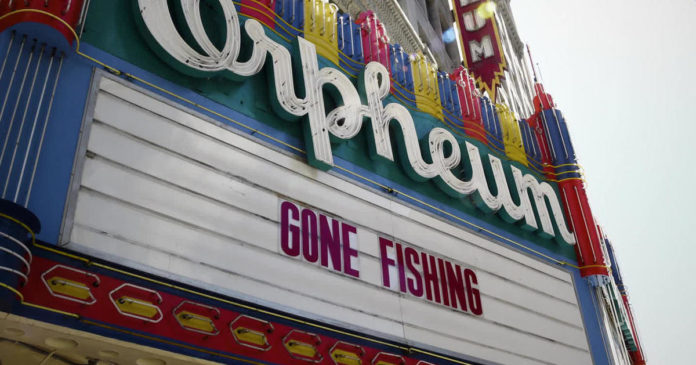 It was the summer of 1975 when beating the heat was all about going to the movies – one movie in particular.  With “Jaws,” the summer blockbuster was born.

This summer was slated to be a real sizzler of nostalgia. “Top Gun: Maverick” was supposed to fly into theaters again in the summer, but it didn’t. So was the latest “Ghostbusters” adventure, “Ghostbusters: Afterlife.” COVID-19 pushed back both those summer releases, making 2020 the “Summer of Silence” at the box office.

“Our industry was one of the first to be hit as a result of the way we work,” said Gabrielle Cateris, president of SAG-AFTRA. “We will be probably one of the last industries to come back.”

SAG-AFTRA is just one of the Hollywood unions figuring out safety protocols to get the cameras rolling again.

More than 200,000 jobs were lost in the motion picture and sound recording industries in April alone – workers who would have otherwise been flooding sound stages and sets, where social distancing is difficult at best.

It’s something Cateris knows all too well, after starring in “90210” (both the ’90s version, and the recent reboot).

Correspondent Lee Cowan asked, “Can you imagine that kind of a shoot being done anytime soon?”

“It would have been a different show,” she replied.

“And it would be a different experience for you as an actress.”

“Oh, it’s already. I just don’t even know what my world’s gonna look like when I go back.”

It certainly can’t look like this, as when Tom Rothman, chairman of Sony Pictures Entertainment’s Motion Picture Group, got onto a Zoom call with Cowan:

“I’d rather be there with ya’ in person, right?” Rothman said. “Let me tell you something, I cannot wait to get the hell out of this room!

“I wouldn’t necessarily write off the second half of the summer,” Rothman said. “We may try to sneak in a movie or two.”

The mechanics of shooting again safely, he says, are largely manageable. “There will be best practices put in place,” he said. “There will be discussions with the unions, I think it’s very doable. What’s challenging is what happens on the other side of the camera. There will never be a time – pandemic or not – where the audience does not want the hero to kiss the heroine.”

Getting sparks to fly, instead of droplets of the virus, will indeed require some movie magic.

Streaming giant Netflix is already trying. “For a long time people who would joke all the time that there’s too much on Netflix. But, you know, not anymore!” said Ted Sarandos, content chief at Netflix, which has seen subscriptions skyrocket during the pandemic. He said they are already back in production on a supernatural thriller called “Katla,” now shooting in Iceland.

They’ve been experimenting with color-coding to break up the crew. Everyone is tested, and everything from props to costumes is sanitized on a regular basis.

Cowan asked, “Do you think that’ll slow down production of things?”

“For sure,” Sarandos replied. “I kind of think about it as airport protocols post-9/11, you know, certainly slowed things down. But in a way, that made people feel comfortable to fly.”

“And it’s the same with this?”

Yes, people have been bingeing at home at a voracious rate, “Tiger King” being just an appetizer, but Sarandos says he’s got enough content to last until the end of next year. “Literally the first day that we were shut down, we had a pitch meeting with some of the biggest stars in Hollywood pitching a new series,” Sarandos said.

Animation series, like Netflix’s “Big Mouth,” have continued production without missing a beat. The cast even doing table reads via Zoom.

Sarandos said, “The interesting side effect of all of this might be that time for stories to marinate, I think, actually will be beneficial on the other side of this.”

If history is any guide, there will be another side to this. “It’s a boom-and-bust industry,” said Emily Carman, a professor of film studies at Chapman University near Los Angeles.  “I don’t know where the industry is going, but I know they will prevail, because if you look at the arc of the film industry, the studios find a way to re-group and take advantage of that moment, and continue.”

At the height of the silent movie era, the Spanish Flu struck. It even became a plot-point in the 1919 Mary Pickford film, “Daddy-Long-Legs”; she sneezes, and the crowd of mask-wearing train passengers runs away in horror. It was made after the pandemic had brought Hollywood to its knees. Production was halted and theaters were closed then, too. Pickford herself became seriously ill.

But both she and the movies bounced back.

Even the Great Depression, which bankrupted many studios, still gave us some of the most enduring and uplifting films of our time, such as the Astaire & Rogers musical, “Flying Down to Rio.” Carman said, “They’re dressed impeccably, they’re dancing on these beautiful art deco stages, sometimes in exotic locations.”

“Exactly. And for 90 minutes, two hours, you forgot where you were.”

Hollywood has provided an escape through all sorts of calamities before. Will it be rough going for a while? Almost certainly.  But those at the top of the movie food chain say, don’t count the movies out yet.

“That experience of being with other people, and laughing and crying and cheering, that’s what makes us who we are!”

Mariah Carey reveals she once recorded an alternative album

Taylor Swift tops Whitney Houston’s record for most weeks at No. 1 on the Billboard 200 chart