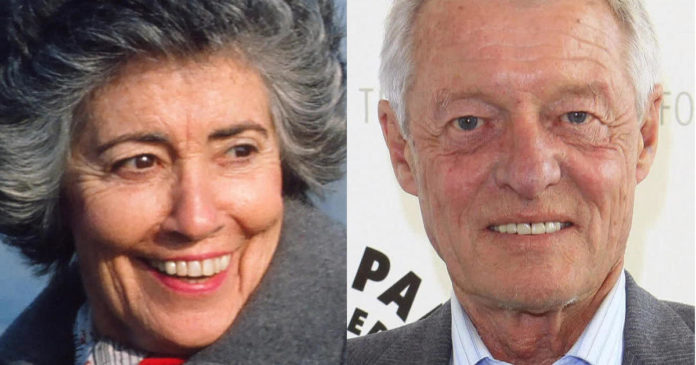 It happened this past week  … word of the loss of Americans of remarkably diverse accomplishments.

Annie Glenn died from complications of the coronavirus.

Married in 1943 to the future astronaut and U.S. Senator John Glenn, she shared his early days in the spotlight, even as a chronic stutter left her mostly silent.

But, after undergoing speech therapy in the 1970s, Annie Glenn became an accomplished public speaker, and an advocate for people with speech disorders.

And we learned of the death of actor Ken Osmond from pulmonary and arterial diseases.

An on-screen performer from age nine, Osmond won fame in the late 1950s and early ’60s as the two-faced Eddie Haskell on “Leave It to Beaver.”

His performance of the slippery Haskell left Osmond professionally typecast – a “death sentence,” he told one interviewer.

Osmond went on to join the Los Angeles Police Department, though he did occasionally reprise his Eddie Haskell role on “Leave It to Beaver” revivals.

She was a trailblazer who transitioned from being named Miss America 1971 to becoming one of the first female network sportscasters. Phyllis George (who died May 14 at age 70) spent several seasons on CBS’ “The NFL Today” between 1975 and 1983, winning praise for her interviews with star athletes like Joe Namath and Roger Staubach. The first female co-host of “Candid Camera” before moving to CBS Sports, George broadcast three Super Bowls and six Rose Parades. She also covered horse racing, hosted the entertainment show “People,” and co-anchored the “CBS Morning News.”

After a brief marriage to film producer Robert Evans, George married John Y. Brown Jr. (the owner of the Boston Celtics), and served as first lady of Kentucky when Brown was elected governor in 1979. She also created a cosmetic and skincare product line, Phyllis George Beauty, and wrote a 2002 self-help book, “Never Say Never: 10 Lessons to Turn You Can’t into Yes I Can!”

She told Texas Monthly in 2007 that she’d originally turned down entreaties by Miss Dallas organizers to enter the Miss Texas contest in 1970, after having entered and lost a competition the year before. “I did it, and I won Miss Dallas. And you know what? Had I won the year before, I wouldn’t have won Miss America. I just wasn’t ready. I needed the loss. I needed to lose to win. Like they say, ‘If you lose, don’t lose the lessons,’ and I learned a lot.”

Comic actor Fred Willard (who died May 15 at age 86), was a founder of the improvisational troupe Ace Trucking Company. He was best known for his scene-stealing appearances in the mock-documentaries “This Is Spinal Tap,” “A Mighty Wind,” “Waiting for Guffman,” “For Your Consideration,” “Best In Show” and “Mascots,” portraying genial cluelessness with zeal.

A multiple Emmy-nominee (including for “Everybody Loves Raymond” and “Modern Family”), he won a Daytime Emmy Award for “The Bold and the Beautiful.” Among his more than 300 credits are TV appearances on “Get Smart,” “The Bob Newhart Show,” “Fernwood Tonight,” “The History of White People in America,” “D.C. Follies,” “Mad About You,” “Ally McBeal,” “Everybody Loves Raymond,” and the upcoming Netflix series “Space Force,” as well as numerous gigs on “The Tonight Show” and “Jimmy Kimmel Live!”

In movies, Willard appeared in “Silver Streak,” “Fun With Dick and Jane,” “How to Beat the High Cost of Living,” “Americathon,” “Roxanne,” “Austin Powers: The Spy Who Shagged Me,” “Anchorman: The Legend of Ron Burgundy,” and the Pixar animated “WALL-E,” as the voice of Shelby Forthright, CEO of the big-box chain Buy n Large.

A rare non-comedy role in Willard’s resume was the TV film of Stephen King’s vampire novel, “Salem’s Lot.” He said he took the job because he admired director Tobe Hooper’s “The Texas Chain Saw Massacre.” But as Willard told Vulture in 2011, he was picked for the part of a real estate salesman seemingly out of the blue: “One of the producers was talking to me and said, ‘You know how we thought of you for this movie?’ And I said no. And he said, ‘You were in St. Martins one morning.’ … It’s a Catholic church. Now, my wife is Catholic, and I guess the producer is Catholic. He said, ‘You were sitting in the congregation, and the sun came through the window and it shined down on you and we said, That’s Fred Willard! We should use him in our movie.’ And I said to my wife, ‘My God, I should have been going to synagogues for years!'”

Shoshana Davis, a former “CBS Sunday Morning” intern, worked as an associate producer and writer for CBSNews.com, before working for the Union for Reform Judaism, and joining the Bergen Performing Arts Center in New Jersey as a business development manager.

In 2012 she wrote in WebMD of her experience getting a pacemaker in her 20s.

Davis died of coronavirus on March 23. She was 35.