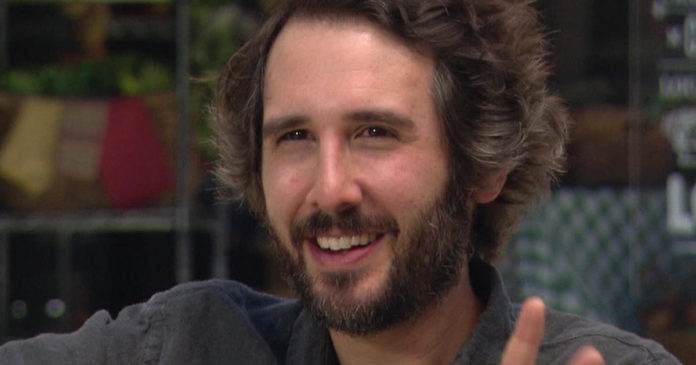 On an ersatz New York City street (actually, the CBS lot in Los Angeles), singer, songwriter and actor Josh Groban can’t help feeling a little nostalgic: “Got the pizzeria here. We’ve got the pawn shop. I miss it very much, I miss New York.

“As a musician, when you encounter having to win over a New York audience, and then what happens when you do, and having that for life love-fest that you can only get in that city, it’s like nothing else.”

In February, Groban had just started a residency at Radio City Music Hall. He’ll take it up again … next year.

“2021, we’re going to put all of those shows back out, and we’re gonna continue right where we left off,” he said. “And I think we’ll all need the communal atmosphere of live performance at that time. And I can’t wait just for the added meaning that’s gonna have, for me and for them hopefully, when I get to go back and do it again.”

Correspondent Tracy Smith asked, “As a performer, as a musician, what is that feeling of being able to connect with that live audience?”

“You’re all going out on a limb together,” he replied. “And for me, when I step foot out on stage, you’re jumping off a ledge a little bit, and your audience is catching you.”

But now, from his home in L.A., the multiplatinum singer is finding new ways to spread the love. One way Groban is connecting with fans is by sharing songs … from his shower. “That’s right. Not creepy, hopefully!” he laughed. “It started just on a whim. I was doing a Billboard concert from my bedroom. I got a request for a couple of songs, and I knew it just kind of needed some big-ness to the voice. It was kind of dry in the bedroom. I wasn’t really happy with the acoustics. Such a snob! And so I started singing in the shower.”

“The acoustics really are better in there?” asked Smith. “Like, we all actually do sound better when we’re singing in our showers?”

“Oh, yeah,” Groban said. “I think it’s scientifically proven. I mean, I know Dr. Fauci’s got other things on his mind right now, but when this is all over with, I’m gonna ask our greatest scientists to talk about why we sound so much better in the shower!”

To hear Josh Groban sing “What a Wonderful World” (in his shower), click on the player below:

Not that Groban really needs the help acoustically. Since 2001, when his first album spent 101 weeks on the Billboard charts, he has sold more than 30 million.

Nowadays, when he’s not singing in his shower, like so many of us Groban has discovered his domestic side: “I’m cooking. I hear that we’ve baked all the flour out of this country right now. I think we all feel like our new cooking craze is a thing we just decided to do, and in fact we’re all now trying to make do with that half a cucumber and a lemon we found.”

“You were on the road a lot. How could you cook?”

“I’ve been a room service, pre-packaged, you know, what-can-I-pick-up-quickly-on-my-way-to-the-studio kind of person. So, I’ve had fun just kind of, you know, slicing and dicing both my vegetables and my fingers! And just, it keeps me from going a little too crazy. I’m learning a new skill, which is fun.”

He’s also hosting weekly screenings of his concerts on YouTube, for fans, and to raise money for charities on the coronavirus front lines.

He said, “The cool thing about it is that I can then chat with the fans. So, we’re all watching it together, which is something I’ve never done, and I’m able to kind of give anecdotes and stories about how this song came to be, or what was actually going on backstage during that weird moment.”

The 39-year-old year Groban has a deep connection with his fans, and has been open with them about his struggles with anxiety.

Smith asked, “What does this pandemic do to a worrier?”

“Well, you flex that muscle really well. I think that when you’re always looking for answers, and you’re always worrying about what the next thing is, there’s a little bit of just kind of opening your hands up and saying, ‘What will be will be.'”

Groban says he’s been writing a lot over the past few months, including a new song, called “Your Face,” which he debuted on “CBS Sunday Morning”:

“I was inspired by the faces of people that I was seeing on TV,” he said.

“I hope we get back to it with a greater appreciation for what we have,” he replied. “That will be a silver lining that we can have from this, is that we live with gratitude, and hold on, hopefully, to those simple but important things that make our lives the most valuable.”

In this 2016 “Sunday Morning” feature, Josh Groban makes his Broadway debut in the musical “Natasha, Pierre & The Great Comet of 1812” (for which he received a Tony Award nomination):