Home World Netanyahu defiant as he arrives for start of trial 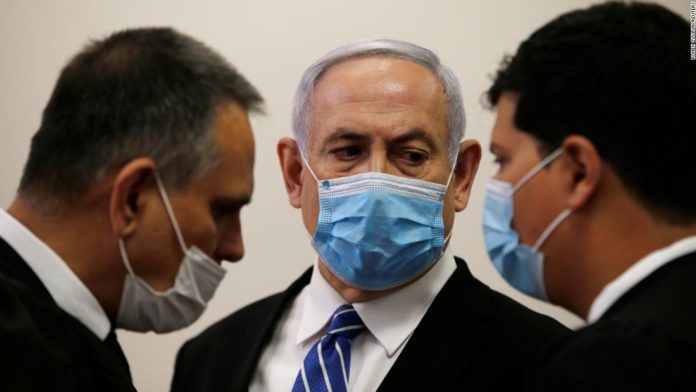 In three cases outlining separate allegations of wrongdoing, the premier stands charged with one count of bribery and three counts of fraud and breach of trust. It is the first time a sitting Israeli prime minister has appeared in court as a defendant.
In the most serious case, Netanyahu is accused of advancing regulatory benefits worth more than 1 billion shekels (more than $283 million) in favor a telecommunications company controlled by a millionaire friend, prosecutors say. In exchange, Netanyahu received favorable coverage from a news site, even influencing wording and story selection, prosecutors allege.
Sunday’s proceedings were finished in under an hour, as they were mostly procedural.
“I read the indictment and I understand its content,” Netanyahu told the court.
He did not enter a plea, but he has repeatedly proclaimed his innocence.
Before taking his place in the courtroom, he made a statement with senior members of his Likud Party standing behind him.
He described his indictments as a “stitch-up” — an effort by Israel’s liberal and media elites to topple him and his right-wing bloc.
The media was looking only to film him sitting on the bench in court, Netanyahu said, adding that he would ask the court to transmit the entire trial live.
“I am here as your Prime Minister, with straight back and proud,” he told those watching at home. “When the public is exposed to the whole truth, the cases will crumble.”
Participants in the small district courtroom wore masks, even while speaking. As the three judges entered, Netanyahu remained standing. He sat only after a cameraman had been ushered out of the room, per an earlier agreement on court procedures.
In discussions about the timetable, defense lawyer Micha Fetman said he was new to the team and needed time to read all the material, which prosecutor Liat Ben-Ari Shweky said would take about three months.
Fetman requested all defendants — Netanyahu, along with two businessmen and one of the businessmen’s wives — be excused from attending every court session, procedural hearings in particular, and the prosecution did not oppose the move.
Proceedings were adjourned until July 19, though it could be months before the prosecution opens.
Under Israeli law, Netanyahu does not have to resign because of the indictment. Instead, he has to resign only if he is convicted and that conviction is upheld through the appeals process.
In a tweet sent as the court session was coming to a close, Netanyahu’s key coalition ally, Benny Gantz, wrote Netanyahu was innocent until proved guilty and expressed confidence the legal system would provide the Prime Minister with a fair trial.
Gantz, Israel’s new alternate prime minister, previously had campaigned in three elections on a platform of never sitting in the same government as an indicted prime minster.
“I would like to reemphasize that my colleagues and I fully trust our legal system and law enforcement agencies. Now, perhaps more than ever, we must move toward unity and conciliation, as a country and as a society, for the State of Israel and all of its citizens,” Gantz’s tweeted Sunday.