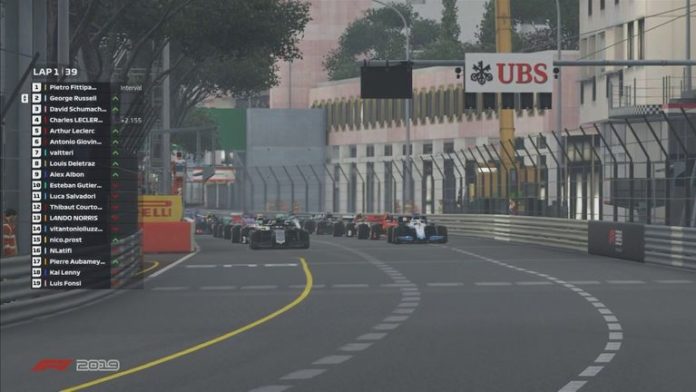 Bottas, Albon and the Leclerc brothers all in the Monaco barriers during eventful virtual race; Pierre-Emerick Aubameyang finishes 16th on his debut for McLaren

George Russell dominated the virtual version of the Monaco GP for his second successive win in F1’s Esports series, as his usual rivals were left fighting among themselves amid a series of collisions around the world-famous street track.

Russell joined Charles Leclerc on two wins in the series but, unlike two weeks ago in a closely-fought duel around virtual Barcelona, the Englishman was in a class of his own this time to win by a mighty 39-seconds from Mercedes’ Esteban Gutierrez.

Leclerc ran second into the closing laps but collided with Gutierrez coming out of the tunnel and dropped to third behind his Mexican rival.

There was also late pain for the other Leclerc in the field, Charles’ brother Arthur, who lost out to Red Bull’s Alex Albon in a wheel-to-wheel fight for fourth place which lasted several corners – including the ultra-tight Monaco hairpin.

Haas’ Pietro Fittipaldi had taken a shock pole position in the virtual wet conditions of qualifying, but lost out to Russell at the start and then quickly slipped back down the order.

However, the Brazilian recovered well and wound up sixth, ahead of McLaren’s Lando Norris.

Arsenal striker Pierre-Emerick Aubameyang, meanwhile, was 16th on his virtual GP debut in the other McLaren and picked up a raft of penalties – and not the kind the Gabon international would usually welcome on the football pitch.

Valtteri Bottas made his debut in the online world for Mercedes but a solid qualifying was undone when last year’s F1 championship runner-up was spun around entering Casino Square. He raced back well into the top 10 but was classified 11th after his own time penalty.

The previous four virtual GPs had seen the long-time racing friends – Russell, Leclerc and Albon – battle for supremacy in nip-and-tuck battles for the lead and podium places.

But not this time.

Russell marched off into the distance once seizing the lead at the start into Ste Devote – running a long first stint on medium tyres – and did not look back from there.

But Leclerc and Albon both had their work cut out to make the top four, with each suffering setback

Albon spun early on while trying to overtake Gutierrez into the fast Tabac corner, while Leclerc lost ground at the pit stops and then found himself in a train of cars being held up by Norris, who at that time had not stopped for tyres.

In the end, a lunge from the McLaren on Arthur Leclerc into Ste Devote backfired and sent both cars into the barriers – the Ferrari spectacularly so – allowing the other Leclerc through.

“Oh man, I feel bad! I didn’t mean to do that,” said Norris on his Twitch stream, as he let the Ferrari back through up the hill.