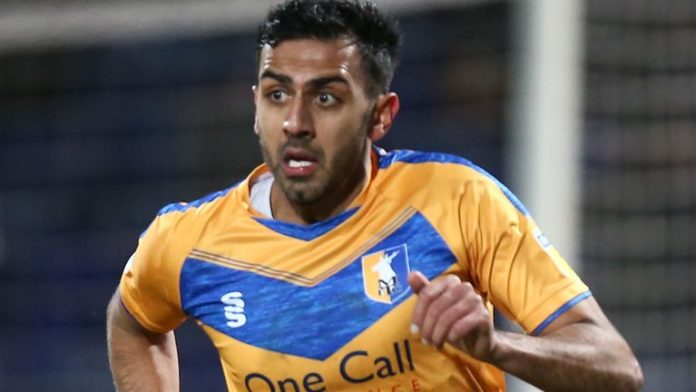 Adil Nabi: “I’m itching. I can’t wait to go and play some football and hopefully carry on where I left off and bang some goals in”

OFI Crete forward Adil Nabi says he is “itching” to return to action with the Greek Super League scheduled to restart in a fortnight after the Europe-wide suspension of football due to the coronavirus.

Birmingham-born Nabi made the switch from Dundee to OFI Crete in January of last year, reuniting the ex-England youth international with former West Brom team-mate Georgios Samaras, who is director of football at the Greek top-tier side.

The 26-year-old became an instant fan favourite, netting four times in his first eight starts – including a goal-of-the-season contender away at soon-to-be-crowned Greek champions Olympiakos – to ensure OFI avoided relegation from the top flight.

Nabi has since won numerous player and goal of the week awards to firmly establish himself as one of the Greek Super League’s most promising talents, but has seen his development stunted by the shutdown of football in the country.

“It’s something you do for a long, long time but when it was taken away from us – from anyone who watches it or plays it – you just can’t wait (to get back).

“You appreciate it a lot more and when we get back onto the pitch – obviously it’s going to be behind closed doors – it’s going to be fantastic to play a competitive game after such a long while.

“Personally I’m itching. I can’t wait to go and play some football and hopefully carry on where I left off and bang some goals in.”

Premier League clubs will vote on Wednesday over whether to resume contact training ahead of a potential restart, but Nabi is already back in training with his team-mates and offered an insight into what that might look like for players in England in the near-term.

“In the first weeks it was groups of five to eight players and in the past week we’ve had full group sessions with the squad, so it’s been decent. In terms of the on-field stuff, it’s back to normal but we still can’t use the changing room or have full use of the training facility.

“We get tested twice a week and have temperatures and a swab test before and after each training session. So, it’s not quite back to normal off the pitch, but on it, we can do set pieces, we work on shape and do pretty much everything at the minute.

“At first, I was quite uncomfortable going back to training, it was more of the enthusiasm to get back playing to be honest, but the way they have done things here has been second to none.”

Nabi is a practising Muslim and was speaking to Sky Sports News on Eid al Fitr, marking the end of the holy month Ramadan, which is a period of fasting, prayer and reflection.

“The last 30 days I’ve been going through the month of Ramadan and today was Eid, which is a celebration,” he added.

“Obviously with the weather here being in the plus 30s, nearly 40 degrees, it (fasting during the month) was quite tough.

“But my club have been fantastic, helping me out, allowing me to sometimes come in a bit later when it is a bit cooler. “But it was quite tough, and a bit different, which was sort of a blessing. It was a nice challenge.”