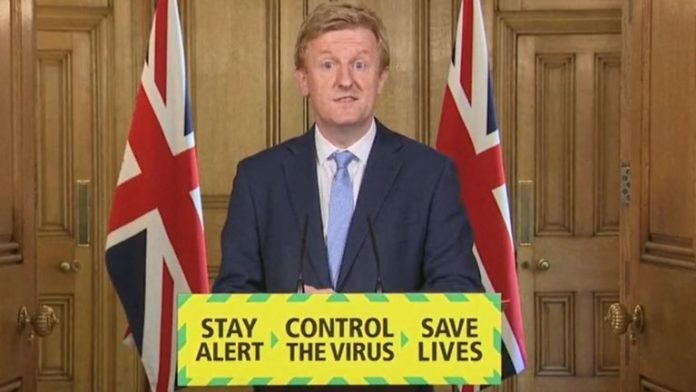 Government has published guidelines for elite athletes to begin a “carefully phased return to training”; Premier League set for close-contact training vote on Wednesday; professional sport in the UK edging closer towards a resumption

The UK government has released its ‘phase two’ guidance for athletes and elite sportsmen and women to make a phased return to close-contact and competitive training, provided individual sports “have the appropriate carefully controlled medical conditions in place”.

‘Stage three’ of the government’s protocols are expected to centre around a return to professional sports in June.

As stated in the official advice, to enable competitors to reach fitness levels required for matches, close-contact training for elite athletes can include coaching and tackling in team sports within a two-metre distance.

The guidelines clarify that: “Stage Two training can be described as the resumption of close contact (interaction within the two-metre social distancing boundary) training where pairs, small groups and/or teams will be able to interact in much closer contact (e.g. close quarters coaching, combat sports sparring, teams sports tackling, technical equipment sharing, etc).”

On May 13, the government published it’s ‘phase one’ guidance, which advised adherence to strict social distancing.

Premier League teams have now taken part in socially distant sessions, after previously training alone or at home, like athletes and professional sportsmen and women across the UK during the lockdown, amid the coronavirus pandemic.

In socially distanced environments, sailing and taekwando have also made steps towards resuming competitive action, while other Olympic and Paralympic disciplines are yet to make decisions over a return.

Sports minister Nigel Huddleston said: “This new guidance marks the latest phase of a carefully phased return to training process for elite athletes, designed to limit the risk of injury and protect the health and safety of all involved.

“We are absolutely clear that individual sports must review whether they have the appropriate carefully controlled medical conditions in place before they can proceed, and secure the confidence of athletes, coaches and support staff.

“Given the wide-ranging input we have received from medical experts, we believe these pragmatic measures should provide further reassurance that a safe, competitive training environment can be delivered, as we work towards a restart of professional sport behind closed doors when it is safe to do so.”

The government stressed that the decision to implement the latest guidelines will be the responsibility of the respective sports bodies and clubs, in consultation with athletes, coaches and support staff.

The current social-distancing rules will continue to apply during travel to training, equipment-sharing will be avoided where possible, and communal areas will mostly be expected to remain closed.

Top-level sport in England could restart behind-closed-doors from June 1 but spectators may not be able to attend venues until a coronavirus vaccine is found.

Meanwhile, the second batch of testing for Premier League teams returned two more positive tests from two separate clubs, with top-flight sides remaining on course for a behind-closed-doors return to matches next month.

Premier League CEO Richard Masters said on Friday that curtailment of the 2019-20 season “is still a possibility”.

The third round of tests are due to take place on Monday and Tuesday, ahead of a key vote on Wednesday over contact training, subject to government approval.

A handful of Premier League players, including Troy Deeney, Danny Rose and N’Golo Kante, have either voiced concerns about returning to training on the basis of health reasons or are not taking part in sessions.

Two positive cases at Hull City have been recorded following the 1014 tests which were undertaken at all 24 EFL Championship sides ahead of clubs returning to training on Monday, while no testing system is currently in place in Leagues One and Two.

Earlier in May, the ECB said they hope England’s players can begin one-on-one training soon after previously confirming that no professional cricket will be played in England and Wales until at least July 1.

A return date for Premiership Rugby remains unresolved with sides unlikely to resume training for at least another two weeks, following a meeting between club chief executives from all 12 sides with the Premiership Rugby League (PRL) on Wednesday.

Super League clubs have made plans to restart their campaign in August and hold ambitious targets for fans being allowed to watch games again in October.