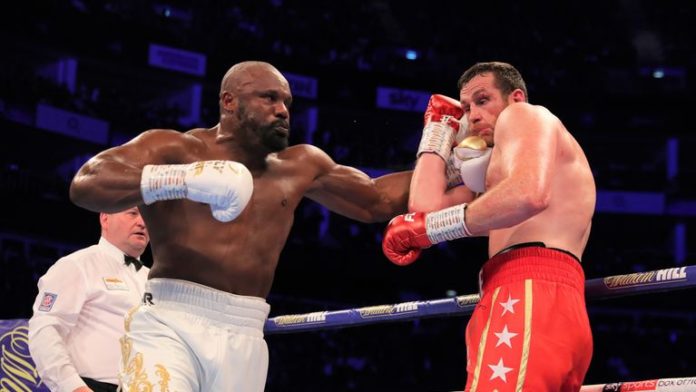 “If I put the phone down and decide I’m not going to fight again, I’d be fine with that”

Like many boxers put on hiatus by the pandemic, former British and Commonwealth champion Price had a lot of time to reflect on his last fight, and memories of the stoppage loss to Chisora in October are flecked with frustration.

“About 11-12 days before the fight, I sprained my wrist in sparring, hitting the top of Dave Allen’s head,” Price told Sky Sports.

“I had to get an x-ray, go and sit at the hospital. I got stressed out. I was worried for the next couple of days, tired, moody and then I was under the weather and started picking up a cold.”

But Price is quick to point out he “felt okay on fight night”, and also blames his own tactics for the result.

“My plan was to stay calm and not expend too much energy because I was coming in at short notice. I probably should have just gone hell for leather.

“Derek just closed the distance too quickly. I didn’t have time to get ready. My legs weren’t right. He kept catching me on the inside, wearing me down.”

Not that Price is claiming he’d have definitely won the fight, if he had received more notice, and hadn’t injured his wrist.

“Even with a full training camp and everything going well, it would have been really hard for me. They say styles make fights and Derek’s style is difficult for me. He’s got that low centre of gravity and just keeps coming, he’s relentless.”

Price’s frustration comes because he wasn’t able to give his best after rebuilding his career in 2019 following six turbulent years.

“I was reluctant to take the Chisora fight, because I felt like I deserved a fight like that with adequate notice. I’d had a great year putting domestic fighters in their place.”

Price talks in calm, considered tones, but his voice bristles with anger when he recollects the Ali fight last March. He was impressing in his home city before his opponent was disqualified in the fifth round for biting.

“It p***ed me off. It got spoke about that much (the biting). I was boxing well. I had him with a left hook and then a right hook and then he just rugby tackled me. I love the feeling of winning, especially the older I get. And that was stolen from me.”

A dominant victory over Allen is recalled with far more satisfaction as the 2008 Olympic bronze medallist fully displayed his skill-set.

“The Dave Allen fight was such a good fight for me. Couldn’t have gone any better. He was pulled out in the 10th round, and although I was relieved he was okay, I was proud of the way it went.

“He’d said some things in the past. I made it so easy for myself. It was so satisfying.”

In the quiet moments of lockdown, when he has a break from homeschooling his 10-year-old son, David Jr, has Price considered retirement? The Chisora loss was his seventh and marked the sixth time he’s been stopped by an opponent.

“I started boxing when I was fourteen. I turn thirty-seven next month. Boxing has given me everything. If I put the phone down and decide I’m not going to fight again, I’d be fine with that. The man I’ve become, the people I’ve met, winning an Olympic medal.

“But I brought myself into boxing. I had to wait in the cold for a 45-minute bus ride each way when I was a kid to get to box. No one’s given it to me and I’ve earned the right to decide when I retire.”

Price admits he gained a powerful insight into what his family go through though when he saw his friend, Tony Bellew succumb to Oleksandr Usyk.

“When Tony got knocked out, and it was a bad knockout, I realised what it’s like to see that happen to someone you care about. I thought it must be how people feel when they see me get knocked out.

We all get these thoughts about work, but if I act on it and don’t go, I’ll know.

“My wife’s supportive of me no matter what. I have asked her in the past, ‘should I call it a day?’ But she’s encouraged me and said she realises it’s who I am.”

But how will Price know when it’s time to go?

“I’d say it’s going to be about two weeks into a camp. I’ll get to the point when I think I can’t be a***d going to the gym or to the track. We all get these thoughts about work, but if I act on it and don’t go, I’ll know.”

Price talks candidly about how “the pressure to not lose” adversely affected his career, contributing to the back-to-back losses to Tony Thompson in 2013 that stalled his rise.

“I struggled to recover from that. Because of the stigma of losing, if you’re a fighter you can’t accept that you might lose. But everyone can lose. Because you’re thinking, ‘I can’t afford to lose,’ you tense up, use more energy and make more mistakes.

“I know all this now because I’ve spoken to a top sports psychologist. It’s only the past 18 months or so that I’ve realised you must train your mind as well as your body. I wish I’d have done it sooner, but you can’t change that.

“Some people are just different. The people who succeed at the very top in sport are less likely to overthink.”

Price believes the current fan base are demanding more from the sport, with promoters urged to put their unbeaten prospects in exciting encounters.

“The fans opinions have become more important because through social media they can speak directly to promoters – and promoters listen. I know Eddie Hearn does. I think the stigma of losing is going, it has to if people want the best fights.”

Britain’s Anthony Joshua and Tyson Fury currently hold all the world heavyweight titles, with a succession of recognisable contenders queuing up to challenge them, and Price foresaw the division’s resurgence.

“I always said when the Klitschkos retired it was going to be interesting. And it is, they are so many exciting heavyweights here and in America, and all should get their chances.”

Price remains keen on a battle with Lucas Browne, the former WBA champion, but the bout he’s most excited about does not involve himself.

“The Joyce and Dubois fight. I’m really looking forward to that. More than any fight for a long time. I think Joyce, in particular, is going to be hard for anyone to beat. The gas he’s got, his size and strength.

“Dubois is the cleaner of the two, but if Joe gets past the first couple of rounds, it’s hard to stay with him. Dubois can come again, he’s a baby really.

“It could be like James DeGale against George Groves, they met early and both went on to be world champions.”

Price is crystal clear when it comes to future opponents. He’s not interested in Joe Joyce, Daniel Dubois or any other ruthless contender on the rise. He wants the final chapter to be a feel-good farewell to the sport he loves, but recognises the paradox in his plan; it’s hard for winning fighters to walk away.

“I just want to be competing again. I enjoy the feeling of winning. Titles and stuff have probably gone. The problem is in boxing, if you get a couple of wins, other things might happen. There’s always the potential for the phone to ring…”