Home World Here comes the US crackdown on China stocks 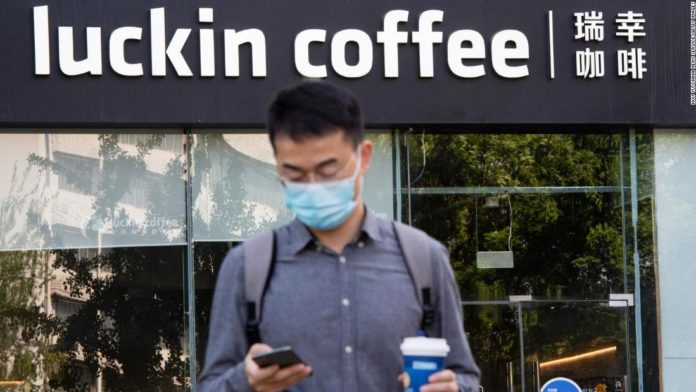 In recent days, US lawmakers, government agencies and stock exchanges have taken steps aimed at limiting Beijing’s access to America’s vast capital markets.
The US Senate unanimously passed a bill Wednesday that would prevent companies that refuse to open their books from listing on Wall Street. The bill’s bipartisan cosponsors said the goal is to “kick deceitful Chinese companies off US exchanges.”
Earlier this week, Nasdaq (NDAQ) proposed a trio of rules that would make it tougher for Chinese companies to go public on that exchange. Nasdaq also moved to delist Luckin Coffee (LK) in the wake of the Chinese firm’s accounting fraud.
Last week, a US government pension fund with nearly $600 billion in assets shelved plans to invest in Chinese stocks. The reversal came after the White House warned that investing in Chinese companies posed national security risks.
The moves, coupled with President Donald Trump’s threats to impose additional tariffs, underscore surging tensions between the world’s two largest economies. The risk is a return of a full-scale trade war, except this time the battle would be waged during a pandemic that is already crushing the world economy.
“The list of anti-China actions is quickly growing in DC,” Ed Mills, Washington policy analyst at Raymond James, wrote in a note to clients Thursday.

Although the pressure on China is being led by Trump, there is bipartisan support in Washington for confronting Beijing, especially because of criticism of China’s initial handling of the coronavirus outbreak.
It’s telling that the Senate bill passed by unanimous consent, meaning a single US senator could have blocked it. None did.
“In the current political environment, few, if any, members of Congress want to be seen as supporting China,” said Mills. “This legislation is moving at warp speed,” he said.
Shares of US-listed Chinese companies, including e-commerce giants Alibaba (BABA) and JD.com (JD), retreated more than 3% on Thursday. Social media company Weibo (WB), which is listed in Nasdaq, fell 2%.
“This bill is to protect investors and it’s long overdue,” Senator Chris Van Hollen, a Democrat from Maryland who introduced the legislation, told CNN Business. He predicted the legislation will ultimately get passed by his colleagues in the House of Representatives.
“It’s not that we’re picking on China. We want them to play by the same rules as everyone else,” Van Hollen said.

The Luckin Coffee accounting scandal has brought renewed attention to the transparency problems linked to US-listed companies from China.
Last month, Luckin shares crashed more than 75% after it disclosed that an internal investigation discovered fabricated transactions. The nosedive wiped out more than $5 billion of the company’s market value, hurting US mom-and-pop investors in the process. Luckin, which went public a year ago, fired its CEO and chief operating officer on May 12.
Investors often face a lack of transparency when it comes to Chinese stocks. China does not allow US audit watchdogs at the Public Company Accounting Oversight Board (PCAOB) to inspect audits of companies registered in China and Hong Kong.
“It’s asinine that we’re giving Chinese companies the opportunity to exploit hardworking Americans — people who put their retirement and college savings in our exchanges — because we don’t insist on examining their books,” Senator John Neely Kennedy, a Republican from Louisiana who introduced the legislation, said in a statement. “There are plenty of markets all over the world open to cheaters, but America can’t afford to be one of them.”
The bill would bar foreign companies from listing on US exchanges if they fail to adhere with US auditors for three straight years.
“It’s important for investors to know that, because companies that are ultimately controlled by a foreign government are subject to the political whims of that government,” Van Hollen said.
All US-listed public companies would also be required to disclose whether they are owned or controlled by a foreign government, including China’s Communist party.

Meanwhile, Nasdaq proposed three new rules that would limit the ability of Chinese companies to go public on the exchange. Among other things, the rules would prevent the listing of smaller stocks, which can be vulnerable to market manipulation, and require that at least one senior executive or director has past work experience at a US-listed public company or other relevant background.
Although the proposed rules do not specifically target China, it’s clear that’s their focus. Nasdaq said the rules would apply to all companies from “restrictive market” countries that have “secrecy laws, blocking statutes, national security laws…or regulations restricting access to information by regulators.”
SEC Chairman Jay Clayton praised Nasdaq’s efforts to crack down on IPOs from emerging markets such as China. “Investors should be cheering,” Clayton told CNBC this week.

Although the latest battleground is over Chinese securities, it is part of a broader battle over technology, national security and global supremacy.
“The Chinese government is playing to win. They believe technology leadership is why the United States became the only superpower in the world,” said David Weild, a capital markets expert and former vice chairman of Nasdaq.
Last week, the US Commerce Department moved to restrict the ability of Huawei, China’s tech crown jewel, to make and obtain semiconductor chips that use American-made software and technology.
“China is on a glidepath to dominance and is cheating at every turn,” said Kennedy, the Louisiana senator, in his statement.
This battle is unlikely to be settled by simply delisting Chinese stocks or through more transparent accounting standards. It’s part of a deeper cold war that will span years, if not decades.