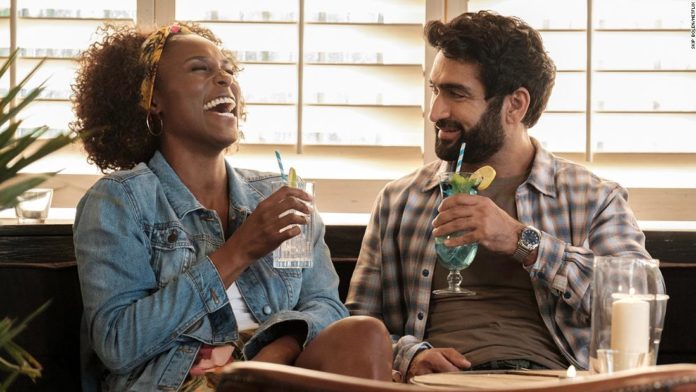 Netflix released a video over the weekend of Kumail Nanjiani and Issa Rae giving a shot-by-shot rundown of a scene from their new rom-com, which debuted on the streaming giant Friday.
The pair shared their (unbleeped) behind-the-scene thoughts individually from their respective homes — due to the ongoing pandemic — but that didn’t stop it from being engaging.
In “The Lovebirds,” Rae and Nanjiani play a couple who breakup right before running into a crime. The two actors dished about a scene from the film in which their characters were held captive.
“We shot this on a stage in hell,” Rae deadpanned.
“We kept adding like days to it,” Nanjiani explained. “It was only supposed to be two days to it and it ended up being like four days, five days.”
The upside of their tormentor, played by Anna Camp, threatening to throw hot bacon grease on them was that the set smelled deliciously of bacon, according to Rae.
Much of the dialogue was improvised, they actors said.
‘It is really fun to improv when you’re supposed to be scared for your life,” Rae said. “Because you’re just saying anything to survive, you’re saying anything to get yourself out of this situation. It made it so much fun.”
“The Lovebirds” was originally supposed to open in theaters on April 3. Global theater closures over Covid-19 led Paramount, the studio behind the film, to change distribution plans and it was aquired by Netflix.