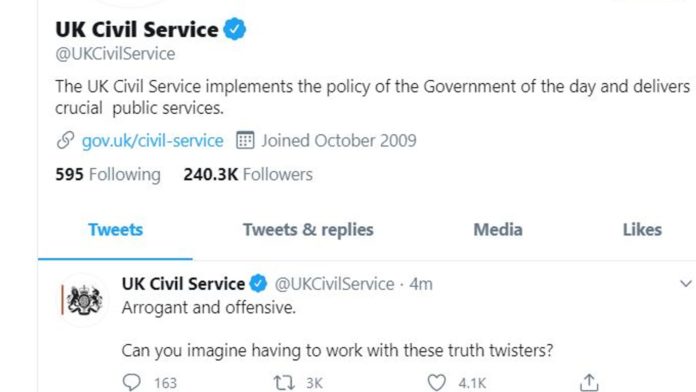 JK Rowling has offered to pay a year’s salary to the person responsible for a tweet from the Civil Service’s official account that appeared to accuse Boris Johnson of being an “arrogant, offensive truth twister”.

The tweet, which was retweeted more around 32,000 times before it was deleted, was posted shortly after the prime minister used his Downing Street press conference on Sunday to defend his chief adviser Dominic Cummings.

Mr Johnson took to the podium inside Number 10 to back Mr Cummings over several reported breaches of the nationwide coronavirus lockdown, which his top aide has also since sought to explain during an unprecedented press conference of his own on Bank Holiday Monday.

The post from the Civil Service account, which was up for about 12 minutes, said: “Arrogant and offensive. Can you imagine having to work with these truth twisters?”

The Cabinet Office has said efforts were being made to find out who had posted the rogue message, which echoed anger displayed by many online over Mr Cummings’ trips between Durham and London.

Quoting the Cabinet Office’s response, author Rowling tweeted : “When you find out who it was, let us know. I want to give them a year’s salary.”

The Harry Potter novelist, who has more than 14 million followers on Twitter, had vented her own frustration at the performance of the prime minister at his briefing on Sunday.

She said: “I can’t remember a clearer demonstration of contempt for the people from a sitting Prime Minister.

“Johnson might as well have shambled into shot, given us all the finger and walked off again.”

She also said: “Watching Johnson. This is despicable. Parents all over this country have abided by the lockdown rules, even while ill themselves.

“Hundreds of thousands managed toddlers while shut up inside cramped accommodation, purely for the common good AS THE GOVERNMENT TOLD THEM TO DO.”

Rowling also took aim at Chancellor Rishi Sunak and Foreign Secretary Dominic Raab, who had joined other senior ministers in tweeting their support of Mr Cummings.

The Vote Leave campaign strategist, who was appointed by Mr Johnson when he became prime minister last year, argues that he was in “exceptional circumstances” for having to seek childcare arrangements in case he and his wife were incapacitated by their COVID-19 symptoms at the time of his alleged lockdown breaches.

Mr Sunak and Mr Raab said his actions were “justifiable” and said critics were “seeking to politicise” the issue.

In an earlier tweet, Ms Rowling said: “This ‘you can bend the rules if you have particular childcare issues’ defence: in Cummings’ case, that was preferring not to look after his own kid.

“Single parents have been on lockdown for weeks. Nurses have isolated from their own families to protect them.”

Despite calls for him to be sacked or resign, Mr Cummings appears set to stay in his post.

Regarding the Civil Service account’s “truth twisters” tweet, the Cabinet Office has said: “An unauthorised tweet was posted on a government channel this evening.

“The post has been removed and we are investigating the matter.”