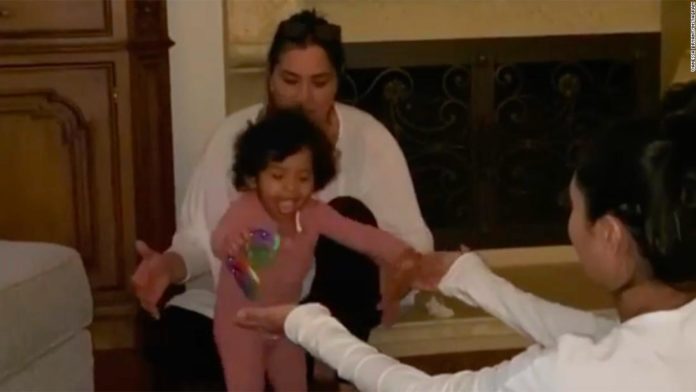 In a video posted to Instagram, 11-month-old Capri stumbles across the room for the first time, into the arms of her ecstatic mom.
“I’m so proud of you!” Vanessa exclaims. “I knew you were gonna do it!”
Kobe, the former Los Angeles Lakers superstar, his 13-year-old daughter Gianna, and seven other people were killed in a helicopter crash in Calabasas, California in January.
“My baby!!!! So proud of my Koko Bean,” Vanessa wrote on Instagram on Monday. “Capri took her first steps from her auntie Sophie to mama today,” she explained.
Kobe and Vanessa married in 2001 and would have celebrated their 19th wedding anniversary this year.
As well as Capri, the couple had three older daughters: Natalia, Bianka and Gianna, who was often known as Gigi.
In April, Vanessa shared a photo of Capri to mark 10 months since she was born.
Vanessa has used social media to comment on the similarities between Capri and Kobe — at the beginning of May, she posted a picture of her daughter, writing: “Capri looks just her daddy (in Gigi’s outfit)!”

‘Stealing a black man’s story’: Mike Tyson hits out at unauthorised miniseries about his life

Women in motor sport who have chosen to challenge

Skyscanner finds flight prices may fall by a third for summer...