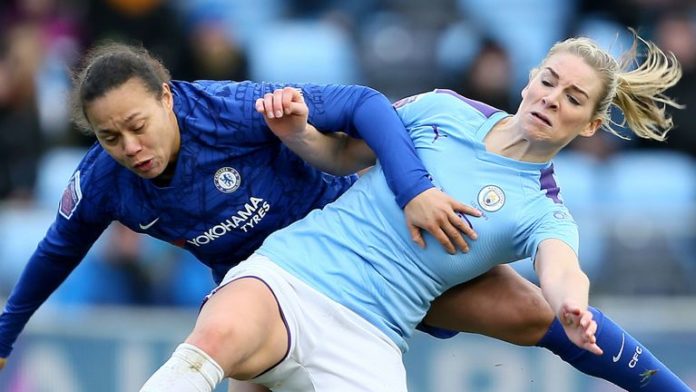 The Women’s Super League and Women’s Championship seasons have been ended with immediate effect, the FA has confirmed.

All football in England has been suspended since March due to the coronavirus pandemic, but league organisers have now decided to curtail the WSL campaign as they turn their attentions to preparing for next season.

Clubs have been consulted about how best to resolve the season and those recommendations will be sent to the FA Board, who will “determine the most appropriate sporting outcome for the 2019/20 season”.

Manchester City currently sit top of the league on 40 points from 16 games while Chelsea are a point behind having played one fewer game – meaning if points-per-game is adopted Chelsea will go above City and win the title.

City say they are “disappointed that we are unable to complete the season” but the club added that they “understand the complexities of the situation and support The FA’s decision”.

The statement continued: “[We] now await the outcome of discussions regarding the final standings of the league table.”

Manchester United were fourth in the table before the season was halted, with head coach Casey Stoney backing the decision.

“It’s obviously disappointing not to be able to complete the season, but it is the right decision for the safety of everyone involved,” she said, having guided United through their first campaign in the top flight.

“Our focus now moves to our development for next season, which we have been continuously planning for throughout the year, and we can’t wait to be back on the pitch again when it is safe to do so.

“I’m so proud of how hard my players and staff have worked throughout the season and how they have adapted to the last 10 weeks of training away from the club, their determination and drive has been incredible to witness.

“We’ve enjoyed our first season in this league, exceeding expectations whilst staying true to our values, but we still have big ambitions for how we want to move forward as a club.”

“Throughout the COVID-19 pandemic, the FA Women’s Super League & Women’s Championship Board has been in regular consultation with clubs and key stakeholders from across both leagues to identify the most suitable and appropriate way to conclude the 2019/20 season, and to give clubs and players the clarity and support they need at this time.

“Following overwhelming feedback from the clubs, the decision to bring an end to the 2019/20 season was made in the best interest of the women’s game. This will also enable clubs, the FA Women’s Super League & Women’s Championship Board and The FA to plan, prepare and focus on next season when football returns for the 2020/21 campaign.

“Supporting the welfare of the clubs and players will continue to be our primary concern throughout this process, which also involved a robust and thorough examination of the logistical, operational and financial challenges that the game currently faces.

“Following full and thorough consultation with the clubs, the FA Women’s Super League & Women’s Championship Board has discussed various recommendations which will be sent to The FA Board to determine the most appropriate sporting outcome for the 2019/20 season. This will include identifying the entries for the 2020/21 UEFA Women’s Champions League, which would be based on sporting merit from the 2019/20 Barclays FA Women’s Super League season.

“We are not in a position to comment further until the FA Board has had sufficient time to consider all of the recommendations and options.”