Home World Peru seemed to do everything right. So how did it become a... 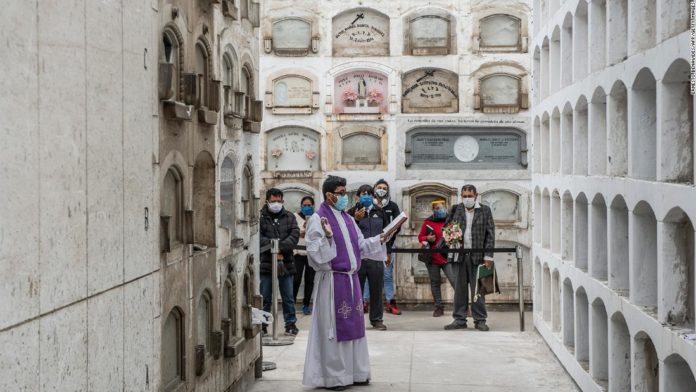 As of Monday, Peru had more than 123,900 confirmed coronavirus cases and 3,600 deaths — putting it second only to Brazil both in number of cases and deaths in Latin America.
The two countries had handled the epidemic entirely differently: While Brazilian President Jair Bolsonaro downplayed the dangers posed by the coronavirus, Peru’s President Martin Vizcarra declared on March 15 a nationwide state of emergency that included mandatory self-quarantine, and shuttered the country’s borders.
But the virus surged all the same.
About 85% of Peru’s ICU beds with ventilators are currently occupied, according to government figures, and overcrowding at hospitals is feared.
“This situation is not just a health emergency, but a health catastrophe, defined as a situation where the pandemic has overtaken the response capacity of the health sector,” Dr. Alfredo Celis of the Medical College of Peru told CNN en Español.
How did a country that responded assertively and seriously to the pandemic end up like this?

The deep inequality in Peru is one reason, according to Dr. Elmer Huerta, a Peruvian doctor and contributor to CNN en Español. “What I have learned is that this virus lays bare the socio-economic conditions of a place,” he said.
Many of Peru’s poor have no choice but to venture outside their homes for work, food or even banking transactions.
For example, only 49% of Peruvian households own a refrigerator or freezer (61% in urban areas), according to the country’s 2017 Census. This translates to a need for many to visit markets daily for food because they can’t stock up, Huerta said.
“You’re supposed to avoid human contact in a society where one can’t stay at home,” Huerta said.
On April 14 — about a month after Peru enacted its mandatory stay-at-home policy and implemented a curfew — CNN affiliate TV Peru showed images outside of a market on the outskirts of Lima. Shoppers waited in line for hours and a large mass of people milled about. Most wore masks, but social distancing seemed impossible.
“We must endure (the crowds) because there is no other way,” one woman standing in line told TV Peru. “If not, we will not have food. We have nothing to eat, that’s why we have come here.”
On that day, the tally of confirmed coronavirus cases in the country was 10,303. Today, it is 10 times higher.

People have also ended up crowding at banks as they attempted to access coronavirus relief funds.
The government’s stimulus package to help millions of Peru’s most vulnerable families was a good idea, but its distribution was poorly designed, said Kristian Lopez Vargas, a Peruvian economist and assistant professor at the University of California, Santa Cruz.
In a report last year, the agency that regulates Peru’s banks reported that only about 38% of adults have a bank account. The lack of access to the financial system means a majority of aid recipients have to go in person to the banks to obtain their money.
“It was not hard to anticipate people’s behavior in their attempt to access this aid,” Lopez Vargas told CNN. “Instead, these policies caused unnecessary harm by inducing people to gather in large crowds in banks.”
Many Peruvians also live and work in ways that simply can’t be reconciled with social distancing, he pointed out. According to Lopez Vargas, more than 30% of households in Peru live in overcrowded conditions, with four or more people sleeping in the same room.
And more than 72% work in the informal economy, according to Peru’s National Institute of Statistics and Information. For those living day-to-day in the informal sector, earning an income oftentimes depends on going out to work and not self-isolating.
This, combined with the needs of millions to obtain food and other items from crowded markets, “was an explosive mix,” Lopez Vargas said.
On Friday, President Vizcarra extended the state of emergency until June 30, keeping in place the mandatory self-quarantine and curfews across the country. It was the fifth time the emergency measures have been extended. But this time, the extension was paired with authorization for certain businesses to re-open, including services like salons, food delivery and dentistry.
Peru’s priorities for enforcing health guidelines also appear to have evolved since the state of emergency was first declared. In early April, Vizcarra reported that during the first weeks of the stay-at-home mandate, as many as 3,000 people were detained for disobeying the measures on some days. On Monday, he announced that the priority will be on enforcing health protocols at the country’s markets.
One lesson learned from the pandemic response is that people must change certain “social behaviors that have done much damage,” he added.
“This kind of behavior is individualistic, selfish…ignoring what’s happening around us, and precisely what has brought this situation upon us, not just in Peru, but the whole world,” said Vizcarra.
But Huerta, the doctor, and Lopez Vargas, the economist, caution against placing too much blame on the people. The underlying problems that the pandemic has laid bare are not new.
“While it may seem like a mystery to some, it’s not,” Lopez Vargas said.