Home Sport Jones and O’Shea on ruckgate: ‘It helped the game’ 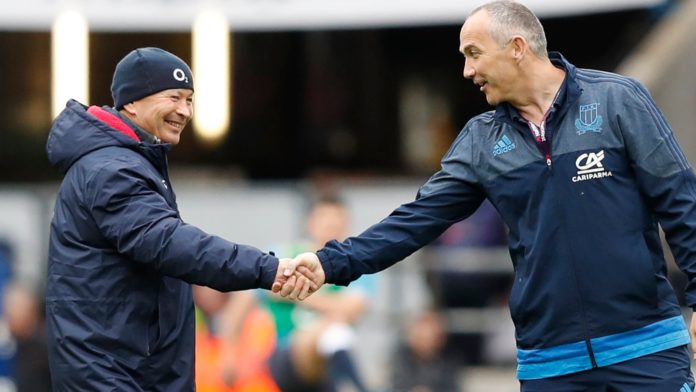 Jones: “It exposed a flaw in the law so it’s good that’s cleared up now and helped the game go forward”

Speaking on The Eddie Jones Coaching Podcast, the pair recount an unforgettable match at Twickenham between England and Italy during the Six Nations.

The controversy came as Italy’s tactics exposed a loophole in the law. The tactic involved, what was at the time, a perfectly legal interpretation of the rucking laws, where the visitors did not commit players to the ruck after making a tackle, eliminating the offside line.

World Rugby reacted quickly to the loophole and changed the law but, at the time, Jones said the match “wasn’t rugby” and described it as “a joke”.

But, speaking on The Eddie Jones Coaching Podcast, Jones said: “Firstly, it took a lot of courage for you guys to do it and anytime when you’re the underdog, as you were, and you try and do something at the start of the game which tactically and psychologically surprises the opposition, it’s great coaching.

“It also exposed a flaw in the law so it’s good that’s cleared up now and helped the game go forward.

“It was a great exercise for us, when you’re favourites to win the game, you’re always thinking about what the opposition are going to do to try and upset you.

“I was very happy with the way the players went about it because it’s not easy to play against, everyone says ‘pick and go’ but that doesn’t get you anywhere off a slow ball – it really added to the Six Nations.

“And if it doesn’t go right you get more criticised than normal, so it takes a lot of courage to do it and I thought it was good mate.”

O’Shea, now RFU director of performance, reminisced on their “lovely match” and said he had to change things up to give his side “something to cling on to” after coming off a big loss to Ireland, without breaking the rules.

He revealed he swore Ugo Monye, who was working as a TV co-commentator for the match, to secrecy after disclosing the team’s tactics to him before the game, so that the former British and Irish Lions winger could accurately explain it to people watching at home.

England were rattled by the tactics and it took them a while to adapt and respond. Captain Dylan Hartley and James Haskell had long conversations with referee Romain Poite with Haskell asking Poite what he wanted to see at the ruck.

The French referee famously quipped back: “I cannot say, I am the referee, I am not the coach.”

England continued to struggle and went into the break 5-10 down. However, they managed to sort themselves out for the second half, scoring five tries for a 36-15 bonus-point victory.