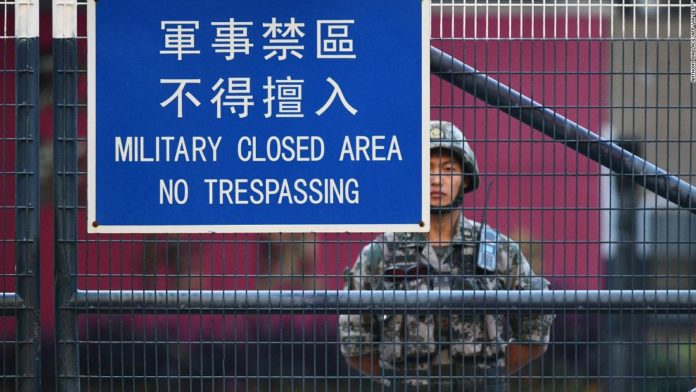 Chen Daoxiang, the PLA commander in Hong Kong, was speaking days after China announced plans to introduce a draconian new national security law which threatens many of the semi-autonomous city’s civil liberties and political freedoms.
“Garrison officers and soldiers are determined, confident, and capable of safeguarding national sovereignty and development interests and the long-term prosperity and stability of Hong Kong,” Chen said Tuesday, adding that the Hong Kong Garrison viewed the national security law as “conducive to deter separatist forces and external intervention.”
Almost every official department in Hong Kong has issued statements of support for the proposed law this week — from the police to the fire department and the Government Flying Service. The PLA Garrison has also made similar statements about its role in the past.
Chen’s words do carry some extra weight, however, given the uneasy status of the PLA in the city.
Chinese troops have been garrisoned in Hong Kong since its handover to Chinese rule in 1997, but the PLA has historically kept a very low profile. This began to change during last year’s anti-government unrest, as paramilitary troops were moved to the Chinese side of the border, and Hong Kong PLA soldiers engaged in cleanup activities.
The proposed national security law — which also permits Chinese security services to operate in Hong Kong for the first time — has led to fears among many in the city that members of the PLA could be deployed onto the streets should violent protests resume.
In mainland China, sweeping national security laws have been used to target human rights activists, lawyers, journalists and pro-democracy campaigners.
The proposed law has been met with outrage within the city and from the international community. This week, the Hong Kong pro-democracy newspaper Apple Daily ran a full page insert calling on US President Donald Trump to intervene on the city’s behalf. In an interview with CNN, the paper’s publisher, Jimmy Lai, said that Trump “is the only one who can save us.”
An unauthorized protest in response to the proposed law on Sunday was met with a heavy police presence. Several thousand people had planned to march on Hong Kong island, but they were soon dispersed with tear gas, baton charges and water cannon.
Another protest is expected Wednesday, as Hong Kong legislators meet to discuss a proposed national anthem law. While the legislation is unrelated to the national security bill, it is another law that has been imposed on the city by Beijing.
Protesters have called for people to gather outside the legislative council early Wednesday in an attempt to repeat their success last year, when they managed to prevent legislators from debating an extradition bill with China, that was eventually withdrawn.
Such a development is unlikely this week, as police plan to deploy thousands of officers to guard an already fortified legislature.
Also speaking Tuesday, the city’s leader Carrie Lam said that Hong Kongers should not be concerned about the law, though she would not be drawn on any specific fears as she said it had yet to be drafted.
“There is no need for us to worry because in the last 23 years whenever people worried about Hong Kong’s freedoms of speech and freedoms of expressions and protest, time and again Hong Kong has proven that we uphold and preserve those values,” she said. “I think the best thing is to see the legislation in front of us, and to understand why at this point in time Hong Kong needs this piece of legislation, for the bigger benefit of the great majority of Hong Kong people.”