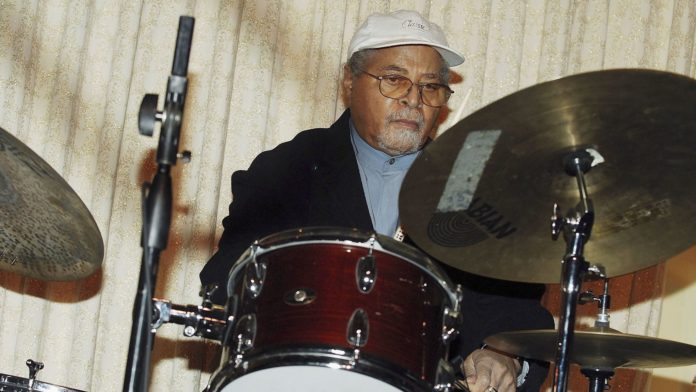 Legendary drummer Jimmy Cobb, the last surviving member from Miles Davis’s groundbreaking 1959 jazz album Kind Of Blue, has died of lung cancer at the age of 91.

The musician’s wife Eleana Tee Cobb announced the news on Facebook, saying he had died at his home in New York City.

He was the last surviving member of Davis’s First Great Sextet and had been performing well into his 80s – releasing his last album, This I Dig Of You, only last year.

It was saxophonist Cannonball Adderley, he said, who recommended him to Davis, and it was his role as a drummer on the Kind Of Blue jam session that would change his career.

The album, released on 17 August 1959, and also featuring Adderley and John Coltrane, captured a moment when jazz was transforming and becoming more popular, and went on to sell more than four million copies.

It also served as a protest album for African-American men who looked to Davis and the jazz musicians to break stereotypes about jazz and black humanity.

Kind Of Blue remains the best-selling jazz album of all time.

“We knew it was pretty damned good,” Cobb said in an interview last year.

Throughout his prolific career, Cobb also worked with artists including Dinah Washington, Pearl Bailey, Clark Terry, Dizzy Gillespie, Sarah Vaughan, Billie Holiday, Wynton Kelly and Stan Getz, as well as releasing a number of albums on his own.

Actor and producer Mark Proksch said: “If you don’t typically go in for jazz (I know it can be divisive and often misconstrued as pretentious) do yourself a favor and give Kind Of Blue a try. And then try to imagine another drummer performing on it. Impossible.”

“One of the greatest has left us,” another fan wrote, while another posted: “RIP Jimmy Cobb, the last surviving member of the sessions that created Kind of Blue. The sextet is back together again.”