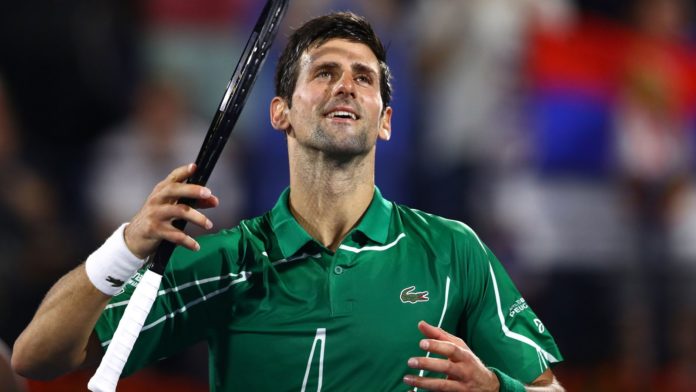 “I am delighted that Dominic Thiem, Grigor Dimitrov and Alexander Zverev will be my guests here in my hometown”

Novak Djokovic marked his return to Serbia by announcing that he has added more star-studded names to a tournament he has organised which will be contested across the Balkans.

The world No 1 had been stranded in the Spanish resort of Marbella for two months due to the coronavirus lockdown.

But Djokovic was able to keep in shape during his time where he and his family were visiting his younger brother Marko.

“Unlike many other players, I was able to train almost every day because we resided in a house with a tennis court,” Djokovic said.

“I refrained from posting clips on social networks because I didn’t want to infuriate other players. I am fit and in good shape, so I am looking forward to the Adria Tour, which I am organising.”

Australian Open champion Djokovic, who went on an 18-0 run at the start of the season, confirmed there would be three big names apart from himself at the tournament which is due to run from June 13 until July 5.

“I am delighted that Dominic Thiem, Grigor Dimitrov and Alexander Zverev will be my guests here in my hometown,” said the 17-time Grand Slam champion.

“This is the first time any of them will be playing here and I will do everything in my power to be a good host.

“We would dearly love for fans to be able to attend but that’s still not certain because we have to abide by the Serbian governments coronavirus regulations.”

The first leg will take place on red clay in Belgrade on June 13 and 14 at Djokovic’s complex and the second in Croatia’s coastal resort Zadar on June 20 and 21.

All four tournaments will feature eight players, competing in two pools of four on a round-robin basis with the winners of each pool advancing to the final.