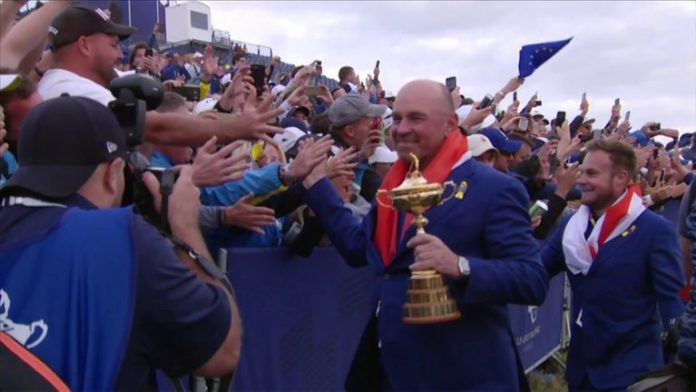 Lee Westwood is looking forward to hosting the first tournament of the resumption of European Tour activities, which is reportedly going ahead in July.

Westwood is “ready to welcome everybody” to the Betfred British Masters at Close House, his home course which also staged the same event in 2017 when Paul Dunne held off Rory McIlroy on a thrilling final day.

The European Tour are expected to announce their modified schedule this week, with the British Masters rumoured to be kicking off a run of events in the UK which could last until the end of August, with the aim of easing travel difficulties for the players.

Westwood revealed to The Golf Show that the course was in great shape and ready to stage the first tournament golf seen on the European Tour since Jorge Campillo was crowned Qatar Masters champion on March 8.

“The course is already in fantastic condition as you’d expect,” said Westwood, who is not attending to travel to the United States for PGA Tour events while the 14-day quarantine regulations remain in place.

“They’ve had seven or eight weeks without any play so the green staff have been able to do a lot of good work. I’ve seen a massive change in the condition of the greens over the last couple of weeks since the weather got better.

“It’s an exciting time for getting the course ready and hopefully it will be the start of the European season kicking off.

“I hosted it there in 2017 and is was great, it was an honour and it was really nice to see it at Close House. A lot of great players turned out so obviously that was very good, and he had a great finish and a great winner.

“The crowds turned out and supported it, but I don’t think we’ll be able to have the crowds this time. But hopefully it will be a great tournament and a great finish and a great way to start off the season again. I’m sure everybody is very keen to see some live golf.”

Westwood and winning 2018 captain Thomas Bjorn were also in agreement that the European Tour and the PGA of America don’t need to rush into a decision on this year’s Ryder Cup, which could go ahead without spectators for the first time.

“I’m glad it’s a decision I don’t have to make,” said Westwood, who also revealed he is keep to captain Europe in Italy in 2022. “Any time you go to a Ryder Cup, the thing that strikes you most about it is the incredible atmosphere, and obviously the fans create that atmosphere for the players.

“So it’s very hard to picture having nobody there in the galleries and in the stands to celebrate with the players. It’s still a long way away and, as we’ve seen, a lot can happen in a few weeks, and we’ll wait and see what happens.”

Bjorn added: “Those decisions really don’t have to be made yet. Ryder Cup Europe and the PGA of America will have these discussions, but we just don’t know when fans will be allowed back in to watch any sport.

“You’ve got to look at alternatives and if it’s still possible to do these things, and the bodies will come to a decision when they need to make a decision.”