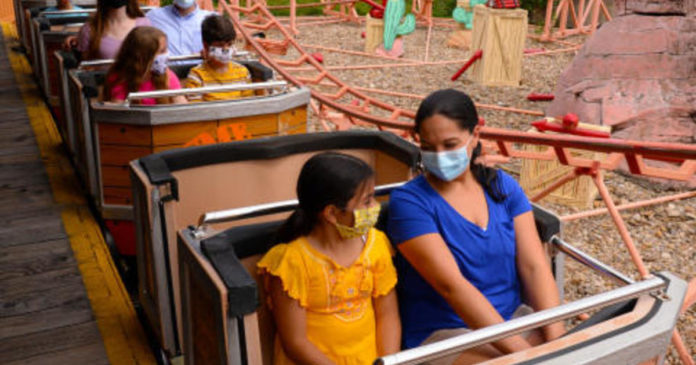 Six Flags Entertainment plans to reopen its 40-acre theme park in Oklahoma City, Oklahoma, early next month. It would be the first of the amusement company’s 26 attractions around the U.S. to admit customers since they all closed due to the coronavirus pandemic.

The regional theme and water park operator said on Tuesday that it would restart operations at the park with limited capacity starting June 5, with a host of safety protocols in play, including a requirement that all workers and customers wear face masks. Anyone without a mask can purchase one at the park’s entrance, the company said Tuesday in announcing the reopening.

The park will operate in what Six Flags calls “preview mode” for three days for members and season pass holders only, then gradually increase attendance levels throughout the month amid new safety measures and hygiene protocols.

Six Flags suspended operations at all of its North American parks as much of the U.S. shuttered to curb the spread of COVID-19. Oklahoma’s governor this month said the state would enter its third and final stage of reopening June 1 so long as hospital admissions and infection rates remain manageable for 14 days.

Oklahoma health officials on Tuesday reported five additional deaths from COVID-19, bringing the state’s total death count from the disease to 318. Another 6,137 people had tested positive for the virus in the state.

Government officials, along with city and county health departments, supported the Six Flags park’s efforts to reopen in accordance with state and local guidelines, according to Trevor Leonard, Frontier City’s general manager.

As an outdoor attraction, Frontier City “poses a significantly lower risk of exposure than indoor venues,” Six Flags CEO Mike Spanos said in a news release. Because the company’s parks cover dozens or hundreds of acres, patrons can be spaced out to achieve proper social distancing, he said.

Future reopening dates for the company’s remaining 25 parks are subject to local government approval, a Six Flags spokesperson said in an email. “We look forward to reopening more parks when we receive that guidance.”

The new normal will have all of the company’s parks using thermal imaging to check temperatures, expanding mobile food-ordering and managing attendance with online reservation systems to stagger arrival times.

The Oklahoma park’s more than 60 rides, shows and attractions include an “extreme loop” coaster called Diamondback and Oklahoma’s only suspended coaster, the Steel Lasso.