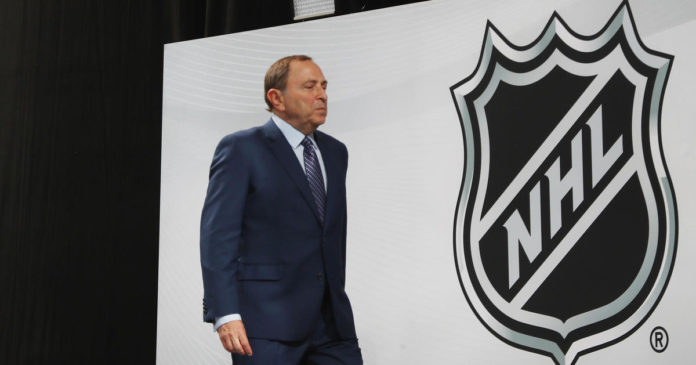 National Hockey League Commissioner Gary Bettman on Tuesday announced the league’s plan and tentative timetable to resume play. The NHL season was suspended March 12 due to the coronavirus pandemic.

“Before I get into the details, I want to make clear that the health and safety of our players, coaches, essential support staff and our communities are paramount,” Bettman said at the beginning of his announcement.

Bettman said the 2019-2020 NHL regular season is effectively over, and play will resume with the Stanley Cup playoffs. There is no definitive date set for when the playoffs will begin, as the league still needs to progress through several more phases of their return to play plan. The league is currently only in phase one.

Rather than have teams travel to each others’ cities, as they normally would, a hub city will be chosen for each conference.

“Each will have secure arenas, practice facilities, hotels and local transportation for our players, coaches and essential staff,” Bettman explained. Clubs will be allowed to travel to their hub city with a maximum of 50 personnel.

The two hub cities have not yet been chosen, Bettman said. Cities that are being considered are: Chicago, Columbus, Dallas, Edmonton, Ls Vega, Los Angeles, Twin Cities, Pittsburgh, Toronto, Vancouver.

The Return To Play committee has not yet decided how seeding will be determined for the first round, nor have they decided if the second round will be a best-of-five or best-of-seven series. The conference and Stanley Cup finals will both be best-of-seven series. The committee has also not decided where the conference and Stanley Cup finals will be played, but Bettman said they will most likely be held in one of the two hub cities.

Teams that failed to qualify for the playoffs will enter the draft lottery.

Bettman said the league hopes to move to phase two of return to play in early June. This phase involves clubs returning to their facilities for “voluntary, small-group on and off-ice training.” No date has been set for when they hope to move to phase three, but Bettman said it will not be before July 1. Phase four is the resumption of play.

“Obviously, we anticipate playing over the summer and into the fall,” Bettman said. “At this time, we are not fixing dates because the schedule of our return to play will be determined both by developing circumstances and the needs of our players.”