Rising seas have already pushed Lousiana’s marshes beyond a tipping point, inevitably dooming this rich habitat for fish, waterfowl and other creatures, and leaving New Orleans ever more vulnerable to storms.

That’s the sobering conclusion of a new study in which researchers gleaned clues from hundreds of cores of sediments drilled from across the sprawling Mississippi Delta. According to their analysis, those clues show that when past sustained sea level rise was as rapid as it is today, the marshes of the delta inevitably disappeared.

“This is a major threat not only to one of the ecologically richest environments of the United States but also for the 1.2 million inhabitants and associated economic assets that are surrounded by Missippi Delta marshland,” the study authors conclude.

And it’s not just the Missippi Delta that’s vulnerable. “Our findings, viewed within the context of long-term sea-level projections, raise the question whether coastal marshes elsewhere may be more vulnerable than commonly recognized,” the researchers caution.

But all is not lost: If we slow global warming, the swamping of the swamps by sea level rise might happen over the course of centuries, not decades. 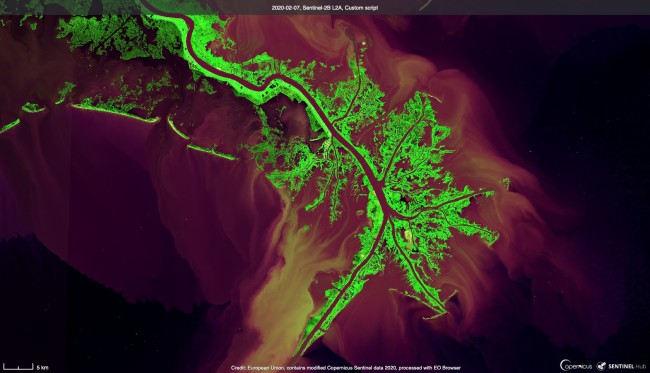 The sub-delta at the end of the Mississippi River is seen in this false-color composite image based on data acquired by the Sentinel 2 satellite on Feb. 2, 2020. (Source: Modified Sentinel 2 data processed by Tom Yulsman using Sentinel Hub EO Browser)

It took many centuries for the nearly 6,000 square miles of Louisiana marshes still remaining to be built up from sediments carried down to the Gulf of Mexico by the mighty Mississippi. You can get a feel for this process from the false-color satellite view above. (See a full-sized version of the image here in my Flickr Photostream.)

In the image, based on data from the Sentinel 2 satellite, sediments flowing into the Gulf from the end of the Mississippi River are rendered in yellow and purple tones. The marshes and drier land that have been built up from centuries of those sediment flows are highlighted in bright green.

As sediments accumulate in the water, they encourage development of plant communities. These in turn trap more material. As long as the flow of nourishing sediments is high enough, and the sea isn’t rising and intruding too fast, a self-reinforcing process takes hold that eventually builds dry land. This is how the Mississippi Delta as a whole was built.

Fringing the now dry areas of the sprawling delta is “a rich mosaic of wetland habitats that support rare and endangered species; great flocks of waterfowl; and commercially exploited populations of furbearers, fish, shrimp, crawfish, oysters, and crabs,” notes a 2006 report published by the National Academies.

Those wetlands have also supported a vibrant tourist economy. According to one analysis, wildlife tourism along the entire Gulf Coast, of which the Mississippi Delta is a major part, attracts 20 million people a year and generates more than $19 billion in annual spending.

Until about the 1930s, sufficient sediment was carried out to the coast and deposited through myriad branches of the Mississippi to allow those rich wetland habitats to keep up with coastal erosion. But then construction of levees began starving the marshes. And the digging of nearly 10,000 miles of canals allowed saltwater from the Gulf to intrude and enhance erosion.

Global warming has played a role, too. As glaciers and ice sheets have melted, and as ocean waters have heated up and expanded, the absolute level of the sea has come up.

As a result, the flow of replenishing sediments through the waterways of the Mississippi Delta has not been enough to keep up with relative sea level rise — and some 2,000 square miles of wetlands have been swallowed up.

Mysteriously, though, during the last decade, that loss has slowed. In fact, a recent analysis of wetland changes shows that replenishment has kept pace with the rate of relative sea level rise at about 65 percent of 185 sites across the Mississippi Delta.

But to what extent is the Mississippi Delta, and by extension other major deltas around the world, sustainable in the long run given accelerating sea level rise from global warming? That was the question the authors of the new study hoped to address.

From the core samples, they were able to tease out the history of the delta region stretching back as far as 8,500 years ago. That history shows when relative sea level was rising or falling, and how fast. It also shows when wetlands dominated the region, and when they were replaced by open ocean water.

In this way, the researchers found that when sea level was rising at a rate greater than about 3 milimeters per year, the marshes inevitably drowned in a process that took a few centuries. 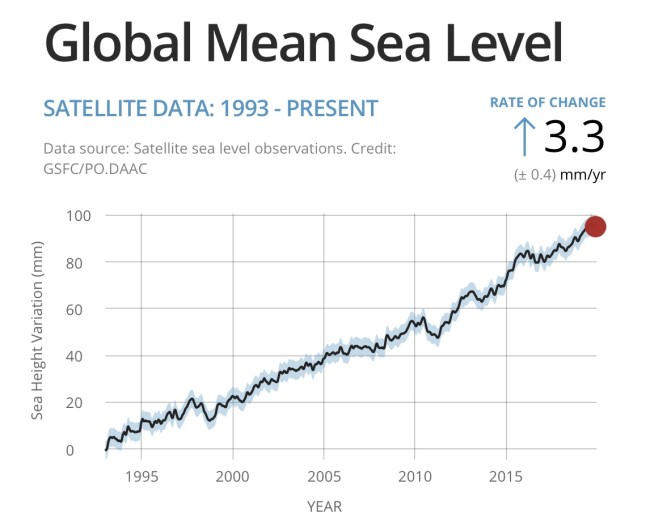 Right now, global sea level is coming up at about that rate.

Given that threat, along with the ravages caused by levees and canals, it’s amazing that Louisiana’s marshes have been as resilient as they have been recently. But the research shows that we should not expect that resilience to persist.

“The tipping point has already happened,” says lead author Torbjörn Törnqvist, a Tulane University geologist, quoted in a story by Mark Schleifstein for Nola.com. “We have exceeded the threshold from which there is basically no real way back anymore, and there probably won’t be a way back for a couple of thousand years.”

Even worse, if global warming continues on its current course, sea level rise will accelerate, perhaps approaching 10 milimeters a year by the end of the century, if not more. The history revealed by the sediment cores shows that when sea level came up that fast about 8,500 years ago — during the warming following the last ice age — the marshes were swallowed in just 50 years.

Which path would we prefer now? Disappearance of the Mississippi Delta’s rich wetlands and other features like it in a matter of decades? Or centuries? If we prefer the latter — so that we can have some time to adapt — science shows that we need to accelerate our efforts at restoring those ecosystems and reducing our emissions of carbon dioxide and the other greenhouse gases that are warming the planet.