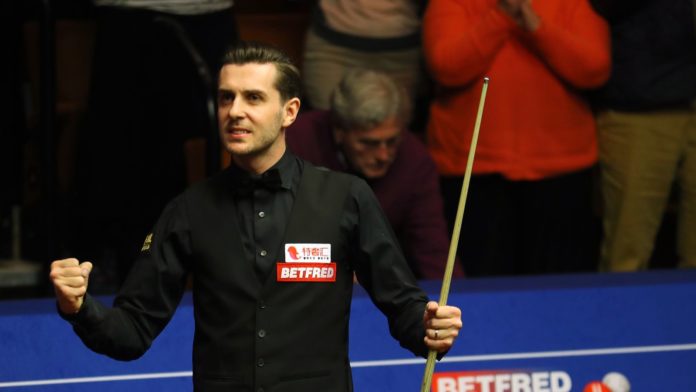 “I think the way things are going, it could be like this for a while. Mentally we need to prepare ourselves that this is the way it is going to be”

Three-time world champion Mark Selby says the idea of the World Snooker Championship being played behind closed doors would be quite “surreal”.

The biggest tournament on the snooker calendar was postponed from its original April 18 start date due to the coronavirus pandemic forcing a widespread sporting shutdown in the United Kingdom.

Organisers are now hopeful of it starting at The Crucible in Sheffield on July 31, although that may yet have to be behind closed doors, something Selby admits would take some getting used to.

“I am fortunate enough to have played in the one-table set-up with a full crowd and know what it is like getting to the latter stages,” Selby told World Snooker Tour.

“There is no better venue to play at than the Crucible. To have nobody there at all, other than the opponent and referee would be quite surreal. At the same time if it comes to a choice between no crowd or not at all, then the whole tour would want to play it.

“I think the way things are going, it could be like this for a while. Mentally we need to prepare ourselves that this is the way it is going to be.

“If it is another six months like this, then so be it. As long as you have your health and all of your family are well then that is all you can ask for at this moment in time.”

The German football Bundesliga has been going, so that is the first sport back, but us being the second one is massive for snooker.

Snooker is set to be among the first major sports to return with a 64-player event behind closed doors in Milton Keynes.

The Championship League, featuring world champion Judd Trump and Ronnie O’Sullivan, will be on free-to-air television from June 1-11 and played under strict coronavirus testing measures.

Selby believes the desperation among sports fans to witness live action could see some who do not tend to watch snooker turning to the table.

“It is great for everyone who follows the game. The German football Bundesliga has been going, so that is the first sport back, but us being the second one is massive for snooker,” Selby said.

“I think we could attract a lot of new followers as well. People are sitting at home, crying out for sport to be on TV.

“At the moment all we have is highlights from different sporting events over the years that everyone has already seen. Snooker has a big following anyway, but this could attract a new fanbase.”