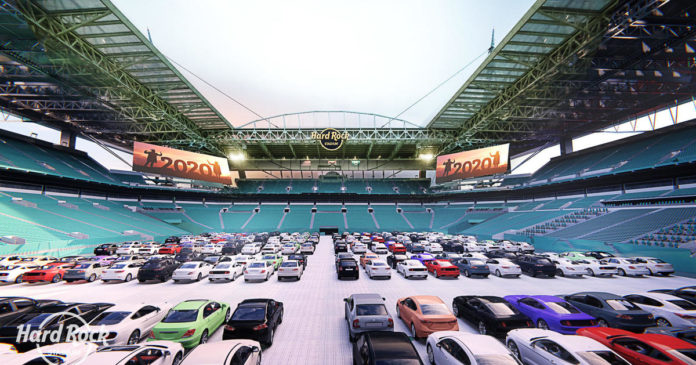 The future of baseball, football and hockey remain uncertain as the coronavirus pandemic continues. In the meantime, venue owners throughout the country have announced plans to convert their facilities into drive-in theaters, and even opportunities for fans to rent out stadiums on Airbnb.

The 2020 NFL season is scheduled to kick off with the Kansas City Chiefs and the Houston Texans on September 10, but until then, the Miami Dolphins announced plans Tuesday to turn Hard Rock Stadium into a drive-in theater. According to stadium website, the drive-in will accommodate up to 230 cars inside the stadium itself. There will also be an open-air theater at the stadium’s south plaza, according to the website.

Both theaters will show old Miami Dolphins games and classic movies. The stadium will also use these theaters to host commencement ceremonies and “other events.” Visitors will be able to order food and drinks through an online ordering system, according to CBS Miami.

“We’ve spent several weeks planning this to be able to provide people with a safe option to go out and enjoy movies, classic Dolphins content, concerts and celebrate 2020 graduates,” said Miami Dolphins and Hard Rock Stadium Vice Chairman and CEO Tom Garfinkel, according to CBS Miami. “It’s a fundamental human need to physically experience and celebrate events and experiences together, and we’re trying to provide options for everyone where they can be safely socially distant and socially present at the same time.”

With the MLB season still on hold, baseball stadiums are also transforming their stands to bring in fans.

Yankee Stadium in the Bronx will soon house drive-in festivals in their largest parking lot on weekends this summer. Along with movies, the “Uptown Drive-in Experience” will also showcase live performances by local artists, street vendor car-side service, drinks, games, raffles and giveaways, according to the event website.

The drive-in events are slated to begin in July. According to CBS New York, only 200 vehicles will be allowed at each event, and first responders and healthcare workers will be able to attend for free.

The minor leagues are finding ways to adapt to the ongoing crisis as well. The Pensacola Blue Wahoos offered up their entire stadium on Airbnb for $1,500 a night.

The offer appears to already be completely booked for the coming months, but those who were able to nab the deal can take up to 10 of their friends for their stay. The living space, connected to the clubhouse, has four bunk beds, two queen-sized beds, two flat screen TVs, a kitchenette and three bathrooms.

According to the listing, guests have full access to the clubhouse, the batting cage, and the field.

Guests will also be given a tour and can add food and beverage packages, merchandise and additional experiences for an additional charge.