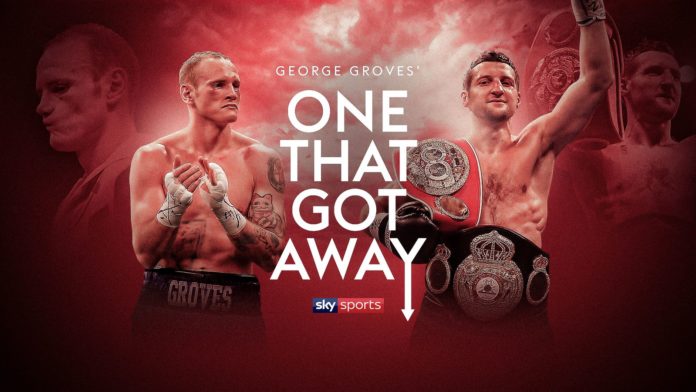 Groves tells The One That Got Away podcast about his big regret: “I may look buzzed, like it was only a matter of time, but that couldn’t be further from the truth”

George Groves begrudgingly accepts the conclusive blow that ended his rivalry with Carl Froch, leaving him unconscious in a heap on his grandest night at Wembley Stadium. It is the despair and the sense of injustice from their first fight that gnaws away at him.

Froch and Groves duked out the two defining British boxing matches of the early-2010s, the rematch an almighty occasion at the national stadium that passed the baton onto Anthony Joshua. The controversial ending of their first match, and the animosity between them, created widespread interest, but for Groves it remains the one that got away.

“This is what I lived for, this is what means more to me than anything else,” he sighs, seven years on from a moment that he re-lives in his mind constantly.

Groves was the prickly and undefeated challenger, Froch the battle-hardened IBF and WBA super-middleweight champion.

For Groves this was his opportunity of a lifetime, a first world title opportunity. For Froch? He has claimed since that he overlooked Groves while considering other potential opponents.

The young challenger did everything to get under the skin of the experienced champion and, by all accounts, succeeded. They refused to shake hands and Froch, on occasion, refused to even look at him.

Groves’ bolshiness is immortalised by the image of him alone in the ring in Manchester on 23 November 2013, opposite Froch’s huge entourage.

“It wasn’t until so many of his corner were getting [in the ring] that I thought: ‘I will make a real point. This is just me. Me on my own’,” Groves told Sky Sports’ The One That Got Away podcast.

“I was trying to make eye contact with him but he was with [his trainer] Rob McCracken, right in the corner. Facing McCracken. McCracken giving him instructions.

“There was a physical barrier of people keeping me from him.

“I thought: ‘I’m going to hit this dude on the chin and put him to sleep’.”

Then, suddenly and shockingly, he almost did.

“He crossed his legs, came in with a mediocre one-two, with no respect for what’s coming back at him. I put one on the button,” Groves said.

“It was over, it looked like he was out. The canvas woke him up!”

In the very first round Froch was floored, for just the second time in his 34-fight career. Groves had publicly predicted his right hand would do damage, and had been proved correct. Froch looked stunned by his rival’s temerity, as much as hurt.

“There is that scene in the studio of David Haye and Amir Khan shocked. My face? Normal,” Groves remembered. “Neutral corner. Same thing as I learned when I was 12 years old at Dale Youth, my amateur club, when I used to knock people over.

Froch did get up with just six seconds remaining in the round.

If Groves had longer, could history have been different?

“Who knows. He does have a fantastic chin. Does it need one more heavy shot or a few? Would he then close up? He was fresh and had a great engine. If I hit him that hard in the eighth round he probably wouldn’t have got up.

“It’s all ifs, buts and maybes. I’m not taking anything away from him. But I definitely would have liked another minute – I probably would have put him away.”

Froch was hurt but soldiering on.

“It was tiring for Froch because he had the anxiety of feeling that he was down on the cards and worrying about being embarrassed after making bold promises. He was getting beaten up,” Groves said.

“I was tiring because I was throwing huge shots.

“Sixth round, I put my foot on the gas. I wanted to give him a torrid time in the sixth. Usually I land a great shot then look, look, look. Wait and see if there’s another one, before initiating again.

“Seventh round, I was going to take off and have a rest. Was that the right decision or not? I’m not sure. It’s a psychological game.

“That’s what they had been told for the entire build-up.

The atmosphere, and the fight itself, was boiling over and prior to the ninth round referee Howard Foster warned both boxers to stop fouling. Groves had thrown the kitchen sink by this point, Froch incredibly was still standing and beginning to launch his own punches in return.

With Froch in the ascendancy for the first time, forcing Groves to defend and stagger around the ring while covered up, Foster stopped the fight.

Groves recalls: “Froch marches in and throws three or four arm-shots. Gun-slinging, Wild West! He doesn’t land any of them. I threw a punch and missed but moved my head out of the way.

“I slipped into Foster’s arm pit! He’s a big lump and was laying on me after nine hard rounds! I looked much more tired than I was.

“I may look buzzed, like it was only a matter of time, but that couldn’t be further from the truth. Even if you’re dead on your feet for tiredness you get through the fight.”

Groves never went down and never absorbed a particularly dangerous punch. He was, for a minute or so, being bullied around the ring by Froch and forced to survive. But the stoppage was a major controversy, and Groves immediately complained that he should have been allowed to continue.

The drama paved the way for Wembley Stadium, where Froch settled the debate with a vicious right hand that knocked Groves out. The rematch, and another defeat, means Groves’ legacy will be forever intertwined with Froch’s. It took Groves until his fourth attempt to finally become a world champion.

All three judges had Groves ahead when his first fight with Froch was stopped.

“I’ve boxed since I was seven-years-old and this has been my dream,” Groves said. “I remember being a kid working out what I needed to do to become the greatest of all time.

“I would have gone out on my [shield] if needs be.