Home World EU still divided over coronavirus relief. That could tear it apart 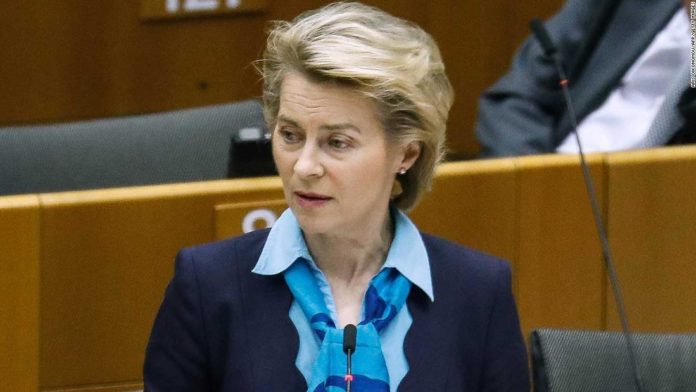 On Wednesday, European Commission President Ursula von der Leyen is due to unveil her proposal for digging Europe out of a historic recession alongside plans for a long-term EU budget. But deep divisions between member states still need to be bridged, raising the risk that urgently needed relief could be held up.
Over the weekend, a group of fiscally conservative nations known as the “Frugal Four” — Austria, the Netherlands, Sweden and Denmark — rejected a compromise struck by Germany and France, the two largest economies in Europe. The holdouts insist that member states most affected by the Covid-19 crisis should be offered loans and not grants.
The rift complicates efforts to get money quickly to countries hit hardest by the pandemic, such as Spain and Italy, where anti-EU sentiment is rising. Leaders caution that the future of the European Union could hinge on what happens next.
An uneven recovery “will rip apart our single market and set the scene for significant political and financial tensions in the euro area and the EU,” Mário Centeno, president of the body of Europe’s finance ministers, warned recently in an interview with the Greek newspaper Politis. “We will sleepwalk into a financial crisis. There is a lot at stake.”

The euro managed to survive the debt crisis between 2010 and 2012, saved by huge EU bailout loans to countries such as Greece, Portugal and Ireland, and a promise by the European Central Bank to do “whatever it takes” to defend the currency.
Now, Europe as a whole is battling its worst economic shock since the 1930s, only some countries will suffer much more pain than others. The European Commission predicts that GDP in the 19 countries that use the euro will contract by 7.75% this year, a record. Italy’s economy could shrink by more than 9%, making it even harder to service its €2.4 trillion ($2.6 trillion) debt mountain. The country’s debt-to-GDP ratio was already 135% at the end of 2019.
As EU leaders scramble to make more relief money available, the big question is whether the pandemic recovery fund should offer member states loans or grants. Using grants would require net contributors to the EU budget, including the “Frugal Four,” to pay in more. Relying on loans, meanwhile, would mean saddling highly-indebted countries such as Italy with even more liabilities.
A breakthrough came last week when Germany and France proposed the creation of a recovery fund worth €500 billion ($549 billion). Under the proposal, the European Commission would borrow money to boost the economy and channel grants to the hardest-hit regions and sectors via the EU budget. The debt issued to raise the fund would have to be repaid over time, “but not by the beneficiaries,” said French President Emmanuel Macron.
The pitch marked a major shift in Berlin’s position, underscoring the severity of the crisis and changing the tenor of discussions, according to Jacob Funk Kirkegaard, senior fellow at the Peterson Institute for International Economics.
“This is Germany realizing that Italy is not Greece,” said Kirkegaard, referring to the importance of avoiding a debt crisis in the bloc’s third largest economy. “If we have another asymmetric recovery, then it will be very bad for the EU and extremely bad for the German economy itself.”
Trade within the European Union accounts for nearly 60% of Germany’s exports.
The proposal still needs to be formalized by the European Commission, and not all 27 member states are on board yet. Austria, the Netherlands, Sweden and Denmark appear united against the Franco-German plan.
But without Germany, their opposition looks thin, said Mujtaba Rahman, managing director for Europe at the consultancy Eurasia Group.
“There’s been big movement in most of Europe’s capitals in recognition of the scale of the challenge,” Rahman said. “That’s decidedly what you’re not getting from the ‘Frugal Four.’ It’s effectively a restatement of old positions.”

Negotiations will begin in earnest after the European Commission reveals its framework this week.
Rahman expects the Commission to call for a recovery fund worth €600 billion ($654 billion) to €700 billion ($763 billion), though the headline number could be lowered during talks. He thinks the proposal will include a mix of cheap loans and direct grants to try to bring the more conservative Northern states on board.
This isn’t the only issue that needs to be hammered out for a budget of around €1 trillion ($1.1 trillion), however.
Determining the EU budget, which runs from 2021 to 2027, has been made harder by the fact that Brexit has blown a massive hole in the bloc’s finances over the next seven years, said Guntram Wolff, director of Bruegel, a think tank based in Brussels. The United Kingdom had been the European Union’s second biggest contributor.
Member states will also need to come to terms on how much money they’ll be expected to put in, whether richer countries will still get rebates and, importantly, the types of programs the bloc’s money will support. The pandemic complicates these issues, which were already contentious.
The timeline is tight. Getting relief funds to Europe in the second half of the year will require a deal among EU leaders in June or July, according to Rahman, followed by an affirming vote in the European Parliament in early September. The lack of a busy summer tourism season is expected to hit Spain, Italy, Portugal and Greece hard in the coming months.
Centeno, who also serves as Portugal’s finance minister, highlighted the urgency over the weekend.
“It would be good if we find an agreement on main features of the Recovery Fund before the summer, to provide assurance to our citizens, companies and the markets, and add to the credibility of the EU response,” he tweeted. “It will be a very difficult negotiation.”

In recent days, political leaders have not shied away from addressing the potential consequences of failure.
“We must demonstrate that what is at stake is not the national contribution of one or the other to the European budget,” French Secretary of State for European Affairs Amélie de Montchalin said in an interview Monday with magazine Le Point. “It is the vitality of the economic project which made us prosperous.”
Many Italians feel they’ve been left alone to deal with the consequences of the pandemic, amplifying resentment that accumulated following the 2015-16 migrant crisis, Enrico Letta, the former prime minister of Italy, said Friday.
“This is why, I think, it is really necessary to have a very comprehensive, fast and effective European response,” he told CNN Business’ Richard Quest.
Should Italy and other southern countries suffer a slower recovery than their northern neighbors, it would feed euroskeptic forces and political instability in the region, Kirkegaard said.
In Germany, struggling firms have received sizable credit guarantees from the state, which means more will survive. In Italy, however, the risk of corporate defaults is growing — underscoring the need for a more coordinated strategy.
“Unless you get some level playing field here, that is going to be a real issue,” Kirkegaard said.
And while Germany has come around on providing grants, it has not agreed to front-load the capital guarantees necessary to procure relief funds before 2021, Rahman noted. Such a delay could be damaging.
The question of timing, he said, is “the single biggest risk.”
— Pierre-Eliott Buet contributed reporting.