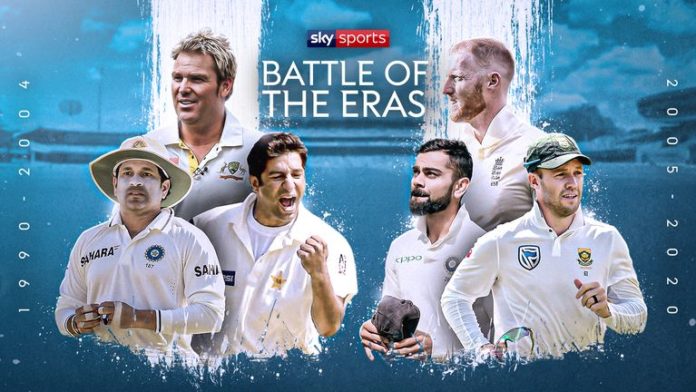 Rob Key was trounced by Nasser Hussain in the first Virtual Test between the two – but, having recovered from a health scare, is out for revenge.

To mark 30 years of cricket on Sky Sports, the former England batsmen have picked two world XIs from players that graced that period to do battle in Benedict Bermange’s simulated game at Lord’s from Thursday.

Nasser has selected his side from the first 15 years, which coincided with his playing career, leaving Rob to pick from the most recent 15 years.

Listen to their team selections as a podcast in the player above or carry on reading to see some of the key calls they had to make – including who to leave out, with our stats man Benedict playing by very stringent rules.

Then make sure you follow the game on skysports.com and @SkyCricket from Thursday to see who comes out on top, with Nasser looking to make it two wins from two having seen off Key when England teams from their respective eras went head to head a few weeks ago.

NASSER: The big bruiser from Queensland. Wonderful Test record. Great player. Outstanding statistics. He got big runs, huge scores and at the top of the order will bully any of the attack from your era!

ROB: I’m going to try and match Hayden. Sehwag was one of my favourite players to watch. My old mate John Wright used to coach India and he reckoned Sehwag never wanted to go to the gym as he felt it was too cold. Wrighty said ‘hang on, if you run on those machines you will warm up’ and Sehwag didn’t believe him!

No one has scored more runs in Test cricket at a better strike rate than Sehwag and he reached India’s first individual triple hundred in Tests with a six.

NASSER: I struggled a bit for openers in my era but I am going to go for Gooch. He was England captain for the first game on Sky…

BENEDICT: Gooch had 15 years pre-Sky and only six in your era, Nasser. I’m sorry, I cannot allow him. We have to be transparent.

NASS: I would have liked a right-handed, left-handed combination but the absurdity of the rules means I will go with Trescothick and Hayden. Tres was a lad who didn’t play enough for England – if he had played more he would have become one of the greatest openers of all time but he was pretty good anyway! Top guy, top player, outstanding player of spin. I didn’t want Hayden and Justin Langer as that was packing my side with Aussies!

ROB: I could have gone for Sir Alastair Cook – but he had a shocker in the last Virtual Test. So I’m going for Smith. I have got him as my captain as well.

NASS: I can’t pick Sir Vivian Richards because of Benny’s rules as he once picked up a bat in another era! I am going for Ponting. Coming in at one wicket down he would always take the attack to the opposition. He was a wonderful player and an outstanding slip fielder. He is also going to be my captain. I don’t think anyone on the planet can argue with Ponting.

ROB: Kumar’s at three but he’s not keeping. As Benedict’s stats show, Sangakkara, one of the greatest ever, averaged 40 as a wicketkeeper and 66 when he wasn’t keeping. Those stats make a mockery of pundits who say Jonny Bairstow can do both jobs!

ROB: I think I could beat him if this was an ODI. I don’t think Kohli can get close to Sachin as far as Test cricket is concerned but overall, if you meshed all formats together and came up with everything, all the stats, I think you would find that Kohli is better than Sachin.

In the decade between 2010 and 2019, Kohli scored more international runs in all forms than anyone has ever made in any decade in history.

NASS: You’ve been texting me for years, Rob, saying Virat is a little bit over-rated and now he is in your world XI…

NASS: The king of big scores and one of the greats. A left-hander with flair, he was so watchable. An outsanding player, who, once he was up for it, was incredibly hard to dismiss. I like the way this is going. Ponting – flair. Tendulkar – over-my-dead-body attitude. Lara – flair. This is an incredibly watchable side. I’m not sure yours is at the minute, Rob…

ROB: What a stupid thing to say! These are world XIs, we are picking some of the best players of all time. Of course they are going to be watchable. We are not going in with [former New Zealand opener] Mark Richardson blocking the life out of it!

ROB: We can talk about Justin Langer behaving like a numpty on The Test documentary and going on about “elite mateship” but, let’s get it right, Smith has won or retained the Ashes the last two times. He is that good.

NASSER: Are you going to pick any England players, Rob? Have you got Joe Root in there?

ROB: How can I pick Root when I have Sehwag, Graeme Smith, Sangakkara, Kohli and Steve Smith? You can’t argue with that team.

NASSER: So you didn’t have Root in your England team or world XI? I look forward to your next interview with him – social distancing at its best that’s going to be!

NASS: No-brainer. He could get in as a batsman, bowler or fielder. Brilliant with the ball. Outstanding batsman. Brilliant at slip.

ROB: This fake game doesn’t take into account how good this guy is. There is no question that he is the all-rounder of his generation but statistically he doesn’t stack up against Kallis with all his runs and wickets. I want this Test to reflect players at their best. Stokes is better than his batting average of 36 and, Benny, I want you to tell your computer that! Stokes is the best all-round cricketer in the world at the moment.

NASS: I wanted Sangakkara but I am going for Gilchrist, a game-changing wicketkeeper-batsman. He was blooming good with the gloves and changed the face of Test cricket with his batting, coming in and smashing it. Imagine having this side 400-5 and then Gilchrist coming in? Ridiculous!

ROB: This is where I am taking a liberty – Nasser’s big mate, De Villiers, gets the gloves.

NASS: Imagine picking a part-time keeper that drops Lara or Tendulkar on nought. You have put AB under pressure there…

De Villiers kept in 24 Tests and averaged 57 with the bat in those games.

NASS: He gives me a left-arm option – and also gets a few runs down the order, not that I need them! One of the greats and he reverse swings the ball at 90mph. I had no clue where it was going.

ROB: I watched him last summer and he was outstanding. All the England players say he was the toughest to face.

NASS: The greatest bowler that has ever played the game. In any world XI, Shane is your spin bowler. He had so much bottle, was a man for pressure. We saw that in the 2005 Ashes when everyone was crumbling around him and he stood up. He had a huge heart – real fight, real character.

ROB: There are people who can’t get in your side who are better than the spinners I could have chosen…

ROB: He took 439 wickets at 22. And from listening to a recent Sky Sports podcast, what a humble bloke he is as well.

Steyn’s strike rate of 42.3 is better than any bowler with at least 200 Test wickets.

NASS: Steyn and Cummins is pretty good. If it swings as well, jeez!

NASS: Another spinner. A guy who spun it both ways. He was an outstanding bowler and I had no clue against this lad. You just did not know which way the ball was going. Imagine if it starts to spin in this game with Warne at one end and Murali at the other!

ROB: Nasser had him in the 1990s team last time, which was outrageous, and he ended up getting a five-for but I am having him this time.

NASS: Who’s your spinner? He can’t bat much if he is coming in after Jimmy!

NASS: I have pace and spinners so I want some metronomic accuracy. He didn’t give runs away. You have some left-handers in your team, Rob, and McGrath was great around the wicket to left-handers. My attack is now unplayable.

ROB: Statistically the best spinner of the era I am picking from is probably Ravi Ashwin but I refuse to have someone in my side who Mankads. He Mankaded one of my best mates in Jos Buttler so I’m not having him. I liked Saeed Ajmal at his best but I am going for Lyon, arguably the spinner of his generation. That’s sad to say as he is an Aussie and looks annoying – although he’s a great bowler and, no doubt, one of the nicest blokes in the world!