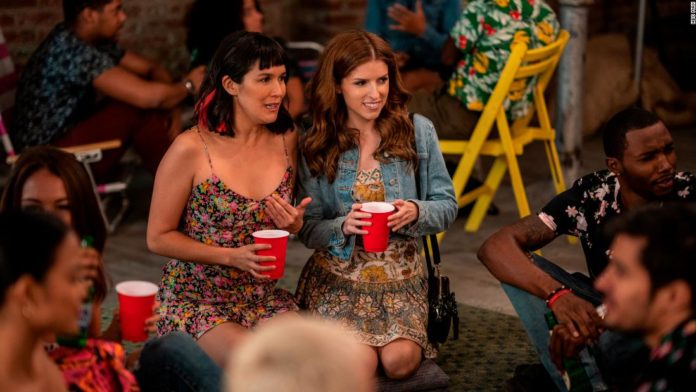 The main issue plaguing the half-hour show, in fact, beyond its general lightweight feel, is the glut of similarly themed fare in the streaming space. Just a few recent examples include the Amazon anthology “Modern Love” and Hulu’s reboot of “High Fidelity” with Zoe Kravitz at its center.
“Love Life” is also described as an anthology, but it’s a season-long one, following one person’s experience through multiple relationships. In narration at the outset, we’re told that people on average go through seven major romantic partners, breaking a few hearts — and getting theirs broken — along the way.
Series creator Sam Boyd (whose credits include the indie film “In a Relationship”) follows Kendrick’s Darby through a variety of encounters — some more serious than others — over multiple years. Each episode is ostensibly supposed to cover a different relationship, but like life, it’s not that neat. Men enter and exit her orbit, occasionally returning unexpectedly, as sometimes happens.
Careers and commitments further complicate the process. The constants in Darby’s sphere include her friends Sara and Jim (Zoe Chao and Peter Vack), a couple with their own commitment issues; and Darby’s mom (Hope Davis), with whom she has a prickly relationship.
The show moves along briskly enough, and there’s an element of suspense thanks to the framing in how Darby’s story will end up. Kendrick ably serves as a sort of “Sex” composite — a little Carrie here, a touch of Miranda there, a dollop of Samantha during her between-boyfriends interludes.
The best thing “Love Life” has going for it, frankly, is the format — shrewdly constructed to allow other promotable stars to parachute in for future seasons, making this an easily renewable concept.
Still, like prospective mates, new programming ventures only get so many chances to make first impressions, and “Love Life” doesn’t feel distinctive enough to set HBO Max — like CNN, a unit of WarnerMedia — apart amid the jockeying for attention among a still-growing crowd.
Overall, the service’s opening-day roster is definitely eclectic. Beyond a vast programming library, originals include new Looney Tunes cartoons, “Legendary” (a competition series set in the world of ballroom culture featured in the FX drama “Pose”), “Craftopia” (a craft competition) and “The Not Too Late Show With Elmo.”
“Love Life” certainly isn’t a frog, but nor is it a case of love at first sight. Basically, it’s a tentative first step, as HBO Max begins its quest to forge a love connection with subscribers.
“Love Life” premieres May 27 on HBO Max.

Kids are the stars in Debbie Allen’s “Hot Chocolate Nutcracker,” a modern twist on a classic ballet

F1 – Hamilton on top again in Bahrain as Albon crashes...

‘The Mandalorian’ brings a major fan favorite into the ‘Star Wars’...