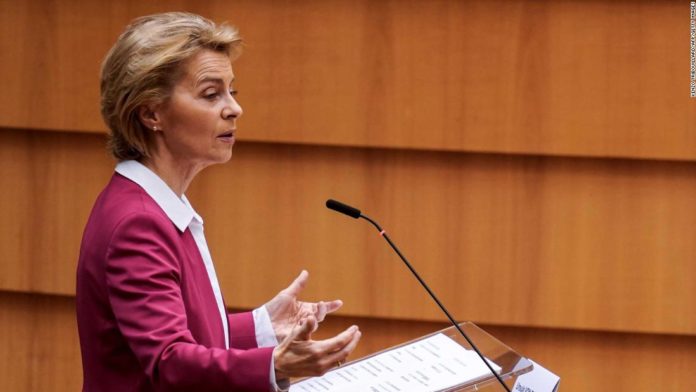 The executive arm of the European Union on Wednesday unveiled a plan that would see it raise €750 billion ($825 billion) on financial markets through its 2021-27 budget. Two-thirds of the money would be distributed to countries via grants, while the remainder would be offered as loans.
“We all understand the crisis is so huge we have to take unusual steps to overcome the crisis and to get out stronger,” European Commission President Ursula von der Leyen said at a press conference.
The pitch was welcomed by southern European countries but could still run into opposition from more fiscally conservative northern countries, which only want to offer loans. All 27 member states must sign off on the proposal, and analysts warn that a delay could inflame political tensions that could pull the bloc apart.
“Now the question is how serious and how strict the opposition [is],” said Carsten Brzeski, chief eurozone economist at the Dutch bank ING. The Commission proposal, he cautioned, is “just the start.”

Germany and France, the two largest economies in Europe, said last week that they supported the extensive use of grants that do not require repayment, an acknowledgment of the economic trauma caused by the pandemic. The Commission has forecast that GDP in the 19 countries that use the euro will contract by 7.75% this year, a record.
European Central Bank President Christine Lagarde said Wednesday the damage could be even greater, predicting a loss of between 8% and 12% of GDP.
The Franco-German plan served as the foundation for the Commission’s proposal, which includes €500 billion ($550 billion) in grants and €250 billion ($275 billion) in loans. The Commission wants to finance the borrowing with new taxes on polluters, non-recyclable plastics and digital services firms.
“This would allow member states to contribute to the next European budget at the same level they currently do,” von der Leyen said.
Supporters of the package called for further negotiations to move fast so relief won’t be delayed.
“Essential day for Europe,” French President Emmanuel Macron tweeted. “The Franco-German agreement has enabled this progress to be made. We must move quickly and adopt an ambitious agreement with all our European partners.”
But deep divisions remain. Over the weekend, a group of nations known as the “Frugal Four” — Austria, the Netherlands, Sweden and Denmark — rejected the Franco-German compromise and said they favor only loans.
“Negotiations will take time,” a Dutch diplomat told CNN. “It’s difficult to imagine this proposal will be the end state of those negotiations.”
The relief package would come on top of €540 billion ($592 billion) in existing EU stimulus efforts. Countries have also launched their own aid programs, though some governments have announced more generous spending than others. Germany’s measures are worth more than 10% of its annual GDP, while programs in Italy and Spain come in at roughly 3%, according to Berenberg Bank.
Still, hard-hit countries in southern Europe such as Italy and Spain are worried that without more assistance, the economic recovery from the coronavirus will be uneven, fanning anti-EU sentiment.
Spanish Prime Minister Pedro Sánchez said on Twitter that an agreement should be reached “soon” so his country can “have access to resources that will allow us to restart the economy and overcome the crisis.”
That urgency was echoed by EU leadership.
“We should not forget we are in a deep crisis and we haven’t seen the end of the crisis so far,” von der Leyen said, noting the risk of bankruptcies and skyrocketing unemployment if the European Union does not act soon. “We should all focus — all 27 [member states] and the European Parliament — on this proposal.”
Brzeski said he does not expect EU members to come to terms by the next meeting of the bloc’s leaders in June. Instead, he expects an agreement by September so funds can be disbursed beginning in 2021.
Mujtaba Rahman, managing director for Europe at the consultancy Eurasia Group, told clients Wednesday that he sees the lack of funding for this year as “the single biggest weakness” of von der Leyen’s plan.
This raises pressure on the European Central Bank to expand its huge bond-buying program when it meets next week, he said.