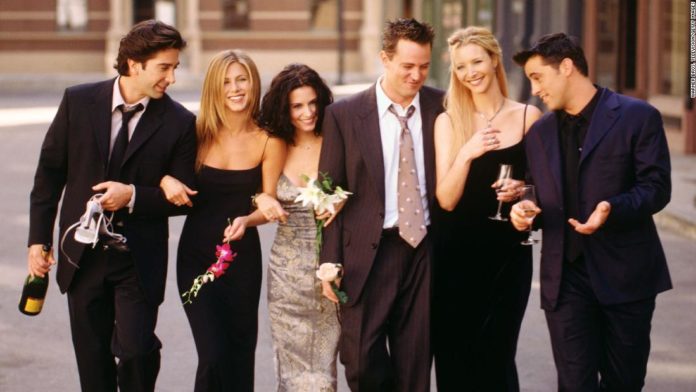 Kudrow recently talked to “Entertainment Tonight” about the planned “Friends” reunion, saying “I can’t wait for it to happen.”
“The six of us haven’t been in a room together in front of people in 25 years and only once a few years ago, privately for dinner,” she said. “I can only imagine. It’s gonna be fun. I mean, it’ll be really fun.”
It was announced in February that the cast of the hit NBC series, which ran from 1994 to 2004, would be getting back together for a reunion to air on the new streaming service HBO Max.
HBO Max is owned by CNN’s parent company.
But the reunion was put on pause because of the coronavirus pandemic.
Kudrow said she and her fellow costars Jennifer Aniston, Courteney Cox, Matt LeBlanc, Matthew Perry and David Schwimmer, started thinking about getting the band back together after the series found success streaming on Netflix.
It was a sentiment shared by “Friends” co-creators Marta Kauffman and David Crane, Kudrow said.
“That’s why Mart and David are so great,” Kudrow said. “They knew what they were doing.”

The Rumored Apple Car Is Bad News for Elon

Was Harry’s chat show appearance the clickbait he so despises?

‘Stealing a black man’s story’: Mike Tyson hits out at unauthorised miniseries about his life

The Rumored Apple Car Is Bad News for Elon

Iceberg size of Bedfordshire breaks off from Antarctica

Hasenhuttl: Romeu’s season is over

Was Harry’s chat show appearance the clickbait he so despises?