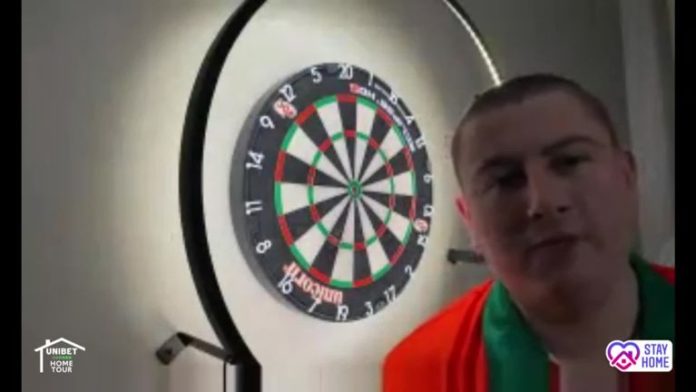 Nick Kenny enjoyed a promising start to life in the PDC before the sporting calendar came to a juddering halt, but as he prepares to embark on the next phase of the Home Tour, he is in bullish mood ahead of a showdown against his darting idol Gary Anderson.

The 27-year-old was one of several stars to cross the darting divide in January and he demonstrated why he became such a highly-rated proposition in the BDO system with last-16 appearances in two of the opening four Players Championship events of the season.

Kenny made his Home Tour bow over five weeks ago, completing a clean sweep at the expense of World Youth champion Luke Humphries, South African No 1 Devon Petersen and former Pro Tour winner Joe Murnan to prevail on Night Five.

“I was really nervous going into it because I wasn’t actually playing very well. I managed to get over the line convincingly in the end. I missed a few doubles but my scoring was really good,” Kenny told Sky Sports.

Several Tour Card holders have revealed their struggle for motivation during the lockdown, although that hasn’t been an issue for the former BDO man – despite the prolonged hiatus.

“I’ve been very busy because I’m a civil servant. It is quite rewarding because you are helping out vulnerable people during times of trouble,” added the Welshman.

“We’re usually always away at weekends – I’ve been working weekends, all the bank holidays so that’s helped me out financially. It’s been flat out, but it’s been good for me to get out of the house and I’m enjoying work at the moment.”

Just a few months ago Kenny didn’t have a dartboard in his home – often opting to visit his local pub for regular practice sessions. However, his decision to purchase a board prior to lockdown has been vindicated.

The Newport native believes he has elevated his game to new heights which he hopes will provide him with fresh impetus when competitive darts returns in the coming months.

“I’d never had a board in the house – we put it up just before lockdown. I went down to Argos, bought myself a board,” he continued.

“The motivation now is brilliant because I’ve taken it up another couple of levels. I am doing really well in a couple of online games.

“I don’t play online too much but I’m posting high averages, scoring a lot more 180’s and 140’s so I’m just looking forward now. It is motivation to get back on the tour and see what I can produce.”

Despite his hectic work schedule, Kenny has also embarked on a strict fitness regime – the results of which have been remarkably positive.

The gruelling nature of the PDC circuit places growing emphasis on fitness and endurance, and the former World Trophy semi-finalist is hoping to reap the rewards.

“I’ve not put darts on the backseat but I’ve tried to change my lifestyle around. I’ve lost about two stone since I last played on the Home Tour,” Kenny added.

“I’ve changed my diet, bought myself a bike and I’ve been out running. I’m trying to slim down and I feel much better for it. The break has been bad for so many people, but for me, it may have been a blessing in disguise.

” I am not just there to make the numbers up. I want to really have a good go at winning the group.”

Kenny is in it to win it…

“When we return I think we could end up playing for a week at a time to catch up because there is the European Tour on the weekend. I can see the Players Championship using mostly midweeks.

“Lots of the boys are in good shape on the tour. You just have to look at Gezzy (Price) and Josh Payne. They’re all in great shape and they’ve got the stamina. Maybe looking back I didn’t have the stamina to cope with the long days.”

Kenny returns to Home Tour action in Group Three of the Play-Offs on Thursday evening, which is headlined by two-time world champion Gary Anderson.

“Growing up Gary Anderson was my favourite player, he was the one I looked up to and I remember watching him in the BDO and then he came over and won the two World Championships in the PDC.

“Luke I have beaten once, that’s the only time I’ve played him and Jamie Lewis – I played Welsh Youth with him back in 2009 and I’ve been mates with him ever since. I’ve beaten him a few times as well as he’s beaten me.

“I’m looking forward to the first game against Gary and if I can start off well I could be in with a good chance. I am not just there to make the numbers up. I want to really have a good go at winning the group.”

The 27-year-old is one of seven players ranked outside the world’s top 100 set to feature in the Play-Offs and one of the most refreshing aspects of the innovative concept is the exposure it has given to the lesser celebrated stars.

PDC chief executive Matt Porter referenced the importance of catering for all Tour Card holders and giving them a platform to perform – an approach that has drawn praise among many, including Kenny.

“They could have just gone with the top 10 but they’ve given everyone the chance. Myself being 105th in the rankings and getting through – it’s good.

“There are a lot of news articles going out because there’s not much sport on. If I’m out in the town people are asking: ‘When are you playing next?’ I am really looking forward to it and hopefully I can get through.”

It’s been a whirlwind few months for Kenny since he produced a blistering display on the fourth and final day of Qualifying School to secure his PDC Tour Card, and he’s relishing the opportunity to pit his wits against the sport’s elite.

The Cwmbran-born star won eight ranking events during a successful BDO career, although he admits he has no regrets over his decision to cross the divide – particularly due to the ongoing controversy engulfing the organisation.

“I’m disappointed for the others that are left there now and I hope something is sorted out for them, especially my buddy Wayne Warren. He won the World Championship and it has probably been the most disappointing year to be a world champion.

“If I hadn’t played out of my skin on the last day of Q School I’d still be in the BDO but I’m so grateful now. I made a lot of friends in the BDO and it was a different kind of atmosphere, but now I think I should have come a lot sooner. I’ve got no regrets though.”