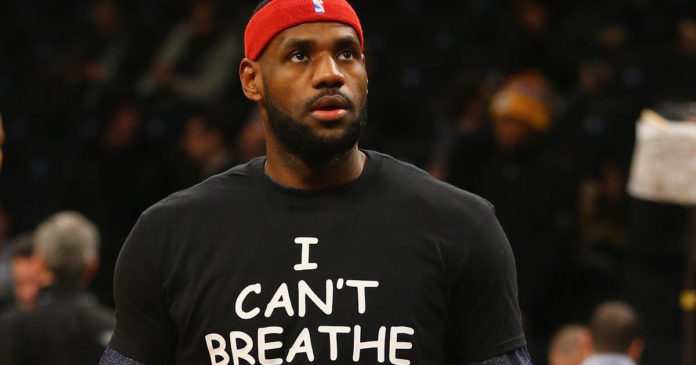 LeBron James, Colin Kaepernick and Stephen Curry are among several high-profile athletes speaking out after the death of George Floyd, an unarmed black man who died after his arrest in Minneapolis.

James on Tuesday night shared a side-by-side image of the officer kneeling on Floyd’s neck and Kaepernick kneeling on the sidelines during the national anthem. James, who is often vocal about issues facing African Americans, wrote: “Do you understand NOW!!??!!?? Or is it still blurred to you??”

Floyd was a suspect in a forgery case. All four responding officers have now been fired from the force. But, Floyd’s family says they want the officers charged.

On Wednesday, James posted a 2014 photo of himself wearing a black and white “I can’t breathe” shirt. Those words were embraced by activists and public figures after the death of Eric Garner, a black man who said “I can’t breathe” as he was placed in a chokehold by an NYPD officer.

Other sports figures, including Kaepernick, have spoken out after Floyd’s death. The free-agent quarterback shared a version of James’ split image on his Instagram Story that was tweeted by former NFL receiver Nathan Palmer.

Stephen Curry of the Golden State Warriors expressed how Floyd’s death is a reminder of the “same reality we live in.”

“George has a family. George didn’t deserve to die,” Curry said on Instagram. “George pleaded for help and was just straight up ignored, which speaks loud and clear that his black life didn’t matter. George was murdered. George wasn’t human to that cop that slowly and purposefully took his life away.”

J.J. Watt of the Houston Texas called the video “disgusting” in an interview with a local television station. “I don’t understand how that situation can’t be remedied in a way that doesn’t end in his death,” Watt said.

Protesters and police clashed on Tuesday night over the death of Floyd. While the protest was mostly peaceful, videos emerged of officers in riot gear throwing tear gas and demonstrators throwing rocks or other objects at authorities.