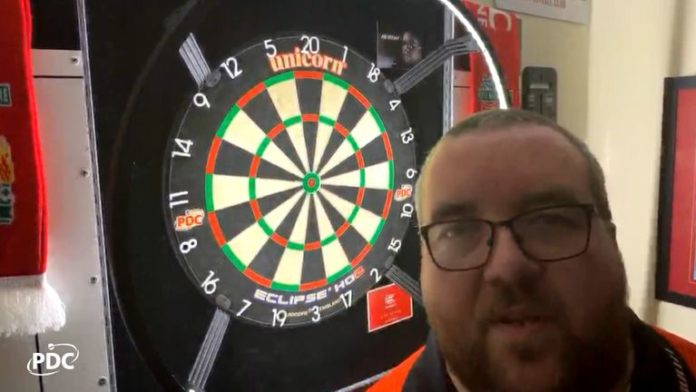 Coverage continues on the Sky Sports app from 7.30pm throughout the week – on Thursday, Gary Anderson and Luke Humphries headline Group Three

Belgium’s Mike De Decker was the surprise winner in the latest round of PDC Home Tour action, thanks to Alan Tabern’s victory over Stephen Bunting in the final match of the night.

Glen Durrant looked to be Wednesday’s favourite and Bunting was the highest-ranked player but it was two of the lesser lights in the second phase who stole the headlines on a remarkable evening of high-quality arrows.

Bunting had beaten Durrant to assume pole position in the group, but De Decker’s tenacity in winning a last-leg decider against Tabern, and then edging out Duzza 6-4, gave him a squeak of a chance going into the final match between Bunting and Tabern.

The Bullet, who had won all five of his games, needed to win just four legs to ensure his progress to the eight-player semi-final stage, but Tabern, throwing a few miles down the road in St Helens, was in inspired form to record a 6-2 win and hand De Decker top spot.

For a second time De Decker recovered from losing his opener, this time against Bunting, but having finished second to Max Hopp on Night 12, he earned a second bite of the cherry to squeeze out Steve Brown and Martin Atkins on Night 26.

Leg difference was his friend again as he took the honours from more illustrious names to join Tuesday night’s winner, and another BDO champion, Jelle Klaasen in making up the first semi-final pool, where they’ll be joined by the winners from Thursday and Friday’s group action.

Everything had looked to be going swimmingly for Bunting, who beat Durrant in the fourth game of the night, and when Premier League leader Duzza was beaten by De Decker, the three-time BDO world champion was out.

De Decker was still in with a chance going into the final match, having eliminated Tabern and Durrant he now needed a favour and Tabern delivered the emphatic win that the 24-year Belgian needed.

Bunting could not get going, having averaged more than 100 in each of his first two matches he was able to split the opening four legs with Tabern, meaning he needed just two more to top the table, even in defeat.

But with his scoring power deserting him, and Tabern displaying the form that took him into the world’s top 10 more than a decade ago, it was Tabern who powered to the finish line – much to De Decker’s delight.

Bunting and Durrant are separated by just two spots in the PDC rankings, and it was world No 17 Bunting who got the better of world No 19 Durrant in the fourth match of the night that had proved pivotal – deflating Duzza as much as invigorating Bunting.

The pair had won through their first group with perfect records, but it wasn’t to be as De Decker emerged triumphant on an entertaining evening.

On Thursday night in a high-profile-looking third group of the Play-Offs, Gary Anderson and Luke Humphries will aim to join Bunting and Klaasen in the last eight.