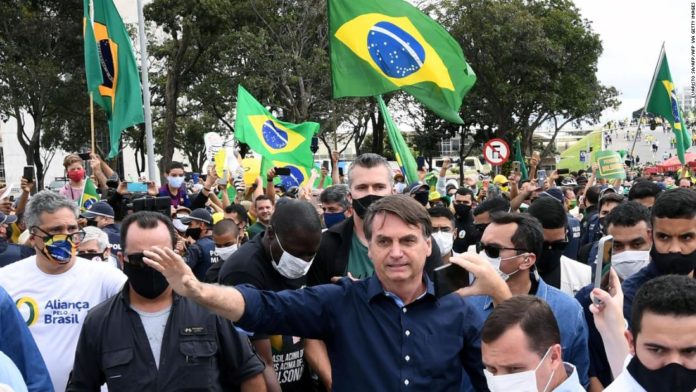 As Covid-19 raced across Europe, knocked the UK Prime Minister flat, and throttled New York City earlier this year, Brazil had plenty of notice that a catastrophe was on its way. But was some of the danger drowned out by the megaphone of its bombastic President Jair Bolsonaro, who has repeatedly dismissed the virus as a “little flu”?
Brazil has now claimed the grim title of most Covid-19 cases globally after the US. More than 25,000 people in Brazil have died, and some experts say the death toll could quintuple by August. Hospitals and graveyards alike are being stretched to their limits.
Around the world, citizens are asking their governments how local outbreaks spiraled out of control. But in Brazil, where the acting Health Minister is a military general with no health background, and the President personally attends anti-lockdown rallies, it’s not clear who in the federal government might even deign to answer the question.
“What do you want me to do?” Bolsonaro asked reporters last month. “I’m not a miracle worker.”

A handful of cases

It wasn’t always this way. When the lethal virus first began to spread in China in February, Bolsonaro showed clear concern about its threat: He only grudgingly agreed to repatriate Brazilian citizens from the then-epicenter, Hubei province, reportedly worrying that they would put the rest of the country at risk.
Brazil’s domestic saga with the virus officially began on March 5, with an announcement by the Health Ministry that “the national scenario has changed.” A total of eight cases in Sao Paulo reported over 10 days had shown that the virus was no longer an import — community spread was underway.
The next week, state governors began to act to contain the spread, shutting down non-essential businesses and activities in Rio, Goias, Sao Paulo and the Federal District. But their precautions raised a red flag for Bolsonaro.
“When you ban football and other things, you fall into hysteria. Banning this and that isn’t going to contain the spread,” he told CNN Brasil on March 15. “We should take steps, the virus could turn into a fairly serious issue. But the economy has to function because we can’t have a wave of unemployment.”
This would become the argument that the outspoken business-first President has consistently repeated, even as the coronavirus crisis radically evolved around him: that the economy cannot be sacrificed for the sake of public health.

Under Brazil’s federal system, state and city officials wield the power to implement regional measures, while the national government oversees broader issues.
In March, Bolsonaro’s government did its part to stave off the coronavirus: It closed Brazil to the outside world by closing most land borders and barring foreigners from entry via international flights. Finance Minister Paulo Guedes also announced a major stimulus measure to fund social assistance programs and cushion the fall for people losing their jobs due to shutdowns.
But the virus was already spreading internally. On March 17, health officials in Sao Paulo confirmed the country’s first coronavirus death, a 62-year-old man who had traveled to Italy.
Local governments’ efforts to stamp out the virus were met with criticism from the top, as Bolsonaro derided unpopular quarantine and shelter-in-place measures.
“Our life has to go on. Jobs should be maintained,” Bolsonaro said in a March 24 speech broadcast on national television and radio.
Bolsonaro also tweeted videos of himself visiting shopping districts in Brasilia, encouraging people to continue work and boosting the unproven drug chloroquine as a cure. On March 29, Twitter took the extraordinary action of removing the posts.
Meanwhile, horror stories about the coronavirus were emerging elsewhere on the continent. In Ecuador, the city of Guayaquil saw its struggle with the virus laid bare online in early April, with social media videos and photos revealing dead bodies lying on sidewalks and abandoned in front of hospitals.

As cold weather began to set in for Brazil’s autumn, Bolsonaro again took steps to reinforce the economy and the public healthcare system.
He boosted funds for severance payments to laid-off workers, and signed a law to provide three months of emergency funds to the country’s poor and informal workers. The health ministry also announced that it would register 5 million healthcare professionals to relocate to the worst-hit states to bolster public healthcare systems.
But his personal words and actions continued to belie his government’s work. On April 9, images showed the President barefaced at a local bakery, hugging supporters and posing with people in defiance of social distancing advice. Crowds could also be heard in the background booing and yelling out their windows from surrounding buildings.
The country passed 1,000 deaths on April 10.

A series of challenging weeks followed for Brazil’s health ministry: On April 16, after weeks of infighting and threats, Bolsonaro fired his health minister, Luiz Henrique Mandetta. The outgoing minister had been one of Brazil’s biggest proponents of social isolation, supporting governors’ decisions to shut down schools and businesses.
In a press conference after Mandetta’s departure, Bolsonaro praised his work, but insisted the economy and health at this moment should be treated like two illnesses. “You can’t treat one and ignore the other,” he said, adding that he had already discussed the need to “gradually open up” with incoming minister Nelson Teich.
On April 28, Bolsonaro expanded the definition of essential businesses, adding retail, food services, transportation, auto repair shops, and storage businesses to the list.
“We were clearly in opposite sides,” Mandetta would tell CNN’s Christiane Amanpour weeks later. “They thought that wouldn’t be more than a thousand (cases). And I think that we are going to be way over this. I think that Brazil can become one of the highest number of cases in the world,” he added.
By April 29, more than 5,000 people had died. Questioned by reporters outside of the presidential residence in Brasilia, the President uttered the infamous words, “So what? I’m sorry, but what do you want me to do?”
He later added, “I’m sorry for the situation we are currently living with due to the virus. We express our solidarity to those who have lost loved ones, many of whom were elderly. But that’s life, it could be me tomorrow.”

The rate of infection only accelerated in May.
On May 7, Bolsonaro and Guedes issued a statement insisting that quarantine measures needed to be relaxed or the economy could collapse. Two days later, Brazil’s coronavirus death toll crossed 10,000.
The next week, Bolsonaro again pried open the notion of essential services, this time adding beauty salons, barber shops and gyms.
“This story about lockdown, closing everything, that is not the path. …That is the path to failure, to breaking Brazil,” he told journalists on May 14 — the same day that he signed a decree exempting public officials from liability for their responses to the pandemic unless an action had an “elevated degree of negligence, imprudence or malpractice.”
The next day, the new Health Minister Nelson Teich resigned. An oncologist by training, Teich had been in the role for less than a month, and had reportedly clashed over promotion of chloroquine as a treatment. Much later, in an interview with Globo News, Teich would also appear to criticize Brazil’s ever-widening definition of essential businesses.
“Healthcare is absolutely essential. Obviously,” he told the Brazilian publication on May 24. “Is beauty essential? I don’t know.”

After having two medical experts at the top of the health ministry and no end to the crisis in sight, Bolsonaro changed tack. He chose Eduardo Pazuello — a military general with no background in medicine or public health — to lead the nation’s fight against the coronavirus as the interim minister.
Brazil’s death toll surpassed 15,000 on May 16. That day, Bolsonaro joined another rally outside his official residence in Brasilia. Video streamed to Bolsonaro’s YouTube page showed him wearing a face mask, shaking hands and even carrying several children.
The next day, Brazil surpassed the UK to become the country with the third highest number of cases in the world.

Within days, Brazil rose again in the grim rankings, overtaking hard-hit Russia with more confirmed coronavirus cases than any country in the world, except the US.
By May 21, 20,000 people had died.
That night, when Bolsonaro stopped at a hot dog cart in Brasilia his entourage attracted a mix of supporters and angry protestors.
“Killer!” one woman could be heard shouting in the video, captured by local media.

On Wednesday, the Health Ministry raised Brazil’s national death toll to 25,598.
Throughout recent months, the federal government’s focus on protecting the economy first has largely been borne out with measures to relieve businesses and inject cash into the economy. But while the Health Ministry has also supported state health systems, the President undermined local leaders tasked with governing behavior that spreads the virus.
“With the example of the president of Brazil, everything is more difficult for us,” Sao Paulo governor Joao Doria told CNN’s Isa Soares on Tuesday. “He goes to the streets without masks. A wrong behavior and wrong indication. This is very sad for Brazil and makes everything more difficult for the governors in the states of Brazil.”
The populist leader’s strategy seemed to have been to leave unpopular decisions to others, while attempting to rake in credit from supporters to whom he plays the everyman — promoting unproven coronavirus “cures” and daring them to break lockdown restrictions on social media.
But the citizens following his example may be putting themselves into harm’s way. Tens of thousands of new cases are being diagnosed each day, yet adherence to social distancing rules appears to be waning. In Sao Paulo, for example, more than 60% of the population initially followed the shelter-at-home guidelines according to city officials. Last week, less than half stayed at home.
Bolsonaro has recently begun calling the fight against the virus a “war,” though he continues to insist that economic stagnation will hurt Brazil more than the virus itself. As the total of known cases approaches half a million, it’s not clear if any number of graves could reverse that calculus for him.